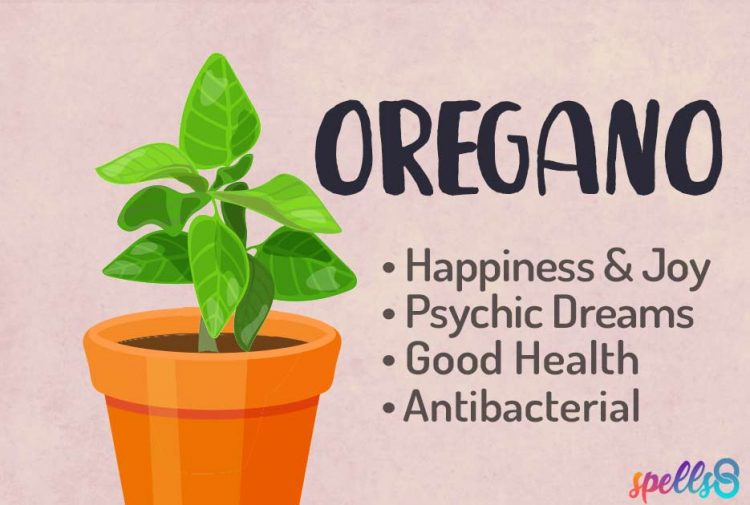 Oregano is typical of Mediterranean Europe, and ancient Romans srepad it throughout their empire (Europe, North Africa and South Asia). Later, Spanish settlers carried its seeds to the Americas and it adapted brilliantly to that climate and land. Oregano has become naturalized in parts of Mexico and the United States.

Uses of Oregano in Witchcraft

Oregano has countless uses in Magic, but above all, it is used for crafting love spells, since this herb is associated with Aphrodite and is ruled by the planet Venus.

Not only it can be used for love but also to enhance our intuition and psychic powers, to protect our home and our animals, bringing harmony and peace to the home.

Another traditional use is to burn some sprigs of dried oregano when a loved one passes away, or to place it on their grave. This will serve as protection and as a liberation from the chains that may remain in this life.

A good way to attract love to your life is to create a bag with dried oregano inside and always carry it with you.

You might be wondering how a delicious pizza herb can help with your spiritual work and improve your health. Oregano is a staple in many cuisines around the world. It has been grown in the Mediterranean for hundreds of years, but recently became popular after World War II in the United States. In Greece, oregano grows wild on the hillsides where shepherds encourage the sheep to eat it so their meat will taste better. Its strong flavor brings an earthy, deep warmth to dishes while providing a hint of sweet. This versatile herb from the Lamiaceae family is related to mint and often mistaken linguistically for marjoram. There are many different types of oregano, but the most common is Oregano vulgare. Fresh, dried, or as an essential oil, oregano has significant benefits to both your health and magickal workings.

The ancient Romans and Greeks knew that oregano brought joy and happiness as they named it from the Greek work ‘oros’ meaning mountain and ‘ganos’ meaning joy. These ancient people used oregano in wedding ceremonies as they crowned the bride and groom with a wreath of oregano to ensure future happiness. Ruled by Venus and associated with Aphrodite, oregano can help deepen existing love between a couple.

Oregano has been used to decorate graves in order to ensure the deceased is able to find happiness and joy in their next incarnation. And if oregano happened to grow on a grave, it indicated that the deceased was finding happiness in the afterlife.

Oregano is the herbal embodiment of joy. It is best used for rituals celebrating joyful large occasions like marriages and births, but it can be used for even simple celebrations or rituals to bring joy into one’s life.

Planted around your house, oregano protects it against negativity and carried in your pocket, purse, or wallet it brings good health. But most of all, oregano promotes psychic dreams. These dreams can be brought about through wearing oregano on the head while sleeping or tucking it under the pillow. Either way, be prepared with a journal and pen nearby to capture your dreams on paper before they disappear!

The ancient Greeks used oregano as a poison antidote as well as in a poultice to treat skin infections. They were on the right track as oregano essential oil has antimicrobial properties from its concentration of carvacrol and thymol. Both carvacrol and thymol have been shown to prevent strains of bacteria from developing in both meat and dairy.

Some diseases are becoming resistant to current antibiotics, and oregano is here to save the day as researchers are currently investigating the ability of oregano to kill various microbes that don’t respond to traditional drugs. In the research, oregano showed significant activity against 11 microbes and 23 different bacteria.

While oregano essential oil is known to block the growth of infection causing bacteria, please note that eating oregano will not prevent infections.

Avoid oregano for two weeks before surgery as it increases the risk of bleeding. Oregano has been known to affect the body’s ability to absob copper, iron, and zinc as well as lower blood sugar. Those with allergies to the Lamiaceae family (oregano, basil, lavender, mint, sage) may develop an allergic reaction.