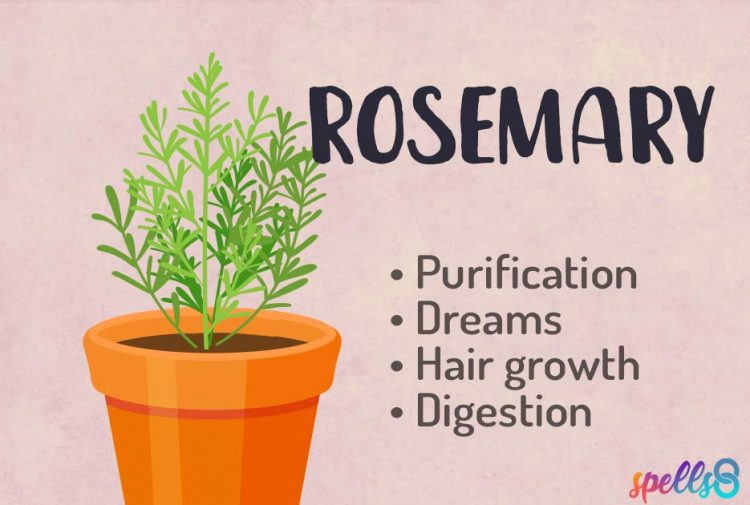 A member of the mint family Lamiaceae, the name “rosemary” derives from Latin ros marinus (“dew of the sea”).

This herb has a lot of fascinating uses. For example, in ancient Greece, students would wear rosemary garlands to stimulate their memory before examinations¹. It is an herb devoted to studies and good memory.

Rosemary is used as a substitute for other ingredients in witchcraft.

Rosemary is a general stimulant and has many applications in traditional herbal and Ayurvedic medicine. Rosemary tea has antioxidant, antimicrobial, and anti-inflammatory compounds².

Making a simple tea with rosemary leaves is ideal for those with stomach and respiratory discomforts, such as asthma-related complications³. Add one teaspoon of leaves to a cup of hot water. Let sit for five minutes and drink.

Placing a sprig of rosemary under the pillow or under the bed serves to protect the person from any harm while they sleep. Some clairvoyants and sorcerers use rosemary in their predictions, for example, by burning the plant and using its smoke to have a clearer vision.

Origin of Rosemary: South of France and other Mediterranean regions.

Uses of Rosemary in Witchcraft

The herb rosemary (Rosmarinus officinalis)has nothing to do with roses or Mary. Rather it comes from the Latin “Rosmarinus” meaning “dew of the sea.” An evergreen shrub native to the Mediterranean, beautiful, fragrant rosemary is certainly an herb of history and legend. Rosemary puts out delicate blue flowers in the spring and summer seasons in humid weather. Rosemary is strong and fragrant just like other members of the mint family.

In the Middle Ages, people wore rosemary around their necks to ward off the “evil spirits” that brought on the plague. In France, rosemary was burned in hospitals to purify the air. Rosemary is known for its cleansing and rejuvenating properties. Burn a few leaves before a spell to purify the circle.

Rosemary is believed to repel negative energies and actively attract good energies.  Ancient Greeks used rosemary to ward off nightmares. Considered sacred to the goddess Aphrodite it is depicted alongside her in many images. In ancient Greece, the wood from the plant was also used to make musical instruments.

Rosemary is a popular herbal ingredient in spells for enhancing memory and even for dream work helping us remember dreams or past lives.  Astrologically, rosemary is considered masculine in nature and ruled by the element of fire and the sun. Because of this, it provides a fiery, strong flavor to your spellcraft.

Rosemary essential oil stimulates hair growth when applied to the scalp. Applying it to the scalp irritates the skin and increases the blood circulation thus resulting in hair growth. A recent study1 showed that rosemary can protect against hair loss. For those suffering from alopecia, a disease that causes hair loss, rosemary oil could be the answer. In order to stimulate growth and protect hair from future loss, five drops of rosemary oil per ounce can be added to any hair care product.

Rosemary is most well-known for its powerful digestive benefits. It has been used throughout time for a plethora of digestion problems ranging from heartburn to gas to loss of appetite. The essential oil stimulates detoxification of the liver and regulates the release of bile. Drinking the tea will sooth indigestion, applying a topical cream will reduce cramping, and inhaling as a vapor eliminates nausea.

If you are pregnant or breast feeding, it is best to avoid rosemary in amounts larger than food amounts. Do not take large amounts of undiluted oil. Do not take if allergic to aspirin. Rosemary might increase the risk of bleeding and bruising in people with bleeding disorders. Rosemary might make seizure disorders worse therefore, do not use it if you suffer from seizures.

Used and studied since ancient times for a variety of health benefits, rosemary is more than just a delicious way to make your meals unforgettable. Rosemary is a hearty herb that you can grow and use at home any time you like.