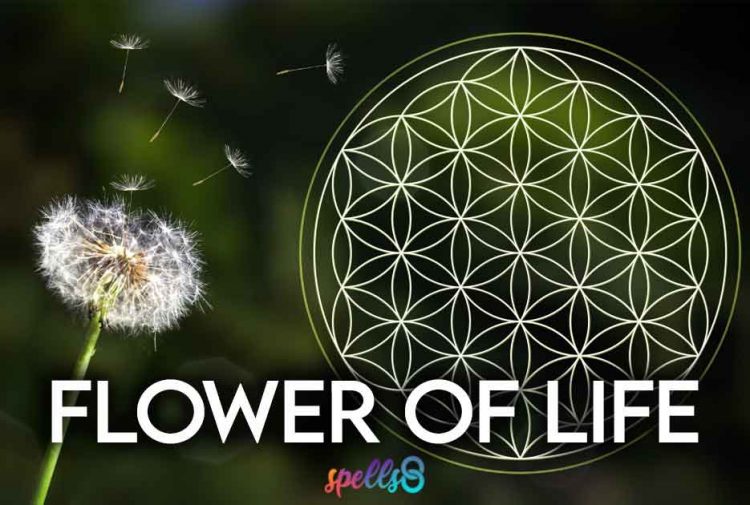 The Flower of Life is a geometric figure made up of 19 complete circles of the same diameter and 36 circular arcs that form a set of hexagonal shape, which is included in turn in a larger circle.

The 19 small full circles in the figure overlap creating symmetrical flower-like radial patterns. This symbol and many similar ones have been used since ancient times and throughout the world as an ornamental pattern to decorate all kinds of surfaces.

Drunvalo Melchizedek states in his book The Ancient Secret of the Flower of Life (Volume 1) that the reason for the “Flower of Life” was revealed to him by the god Thoth in exchange for the Mer-Ka-Ba meditation technique. Thoth would also have predicted that he would find this image in Egypt. Melchizedek attributes to these drawings an antiquity of almost 6,000 years.

The symbol already existed in the Bronze Age, when solar cults were more intense in Europe, and it is believed that, like triskeles, quatrefoils and swastikas, they are solar symbols.

Spiritual Properties of the Flower of Life

According to Melchizedek, the Flower of Life contains within its proportions each and every aspect of life that exists. It contains every mathematical formula, every law of physics, every harmony of music, every biological life form including your specific body. It contains every atom, every dimensional level, absolutely everything contained in waveform universes.

The Flower of Life symbol is considered sacred among various cultures around the world, both ancient and modern. From the models that are inside, the symbol of The Flower of Life has the ability to demonstrate how all things come from a source and are intimately and permanently woven together.

Symbols related to the Flower of Life

The Flower of Life is a template from which other geometric models can be extracted or derived.

The center lens of the 2-circle figure is called a Vesica piscis. That’s the sacred shape that makes the Triquetra, the Celtic spiritual symbol of triplicity. If we keep adding circles we obtain the Seed of life symbol.

The “Fruit of Life” is a symbol made only with circles and used as a basis for drawing the Platonic or Pythagorean solids.

If the circles are given volume, a 3D cube made of 4x4x4 = 64 spheres is obtained, the three-dimensional Metatron’s Cube.

In early Kabbalistic scriptures, Metatron is said to have created this cube from his own soul. This can also be seen in Christian art, where it appears on his chest, or floating behind him.

Metatron’s cube is also considered a holy glyph, and is sometimes drawn around an object or person to protect it. This idea also appears in alchemy, in which the circle was considered a circle of containment or a circle of creation.

Read also: The Alchemy of Leonardo Da Vinci and The Vitruvian Man

Because it is considered the matrix of creation, it is a divine and very powerful way to harmonize spaces with sacred geometry and for healing people and animals. Art Witches use geometrical patterns and their symbolism to cast spells, for example using protective symbols, as well as in crystal grids.

It is important that the harmonizer receives and allows natural light to pass through. It is convenient to place it near a window so that the harmonizer enhances and amplifies the light energy.
Color should be taken into account, depending on what aspect of your life you want to work on or enhance.

Another way to use the power of this symbol is by combining it with crystals, creating what are known as Crystal Grids. In this case, the flower of Life enhances the effects of crystals, being used in rituals of abundance, prosperity, love, etc.

But the most powerful way to use the power of Sacred Geometry and especially that of the Flower of Life is by doing guided meditations visualizing the form. It consists of focusing your gaze on an image of this sacred code while we listen to an audio of a guided meditation.

The Flower of Life in History

Those who decide to tattoo the geometric pattern of the flower of life, this symbolizes the infinity of life, the connection with creation and the universe, time and space, an expert tattoo artist will be able to express the beauty of the flower in maximum splendor of life in the skin of any person.

A flower of life tattoo can be consecrated with a simple blessing, just like an amulet.