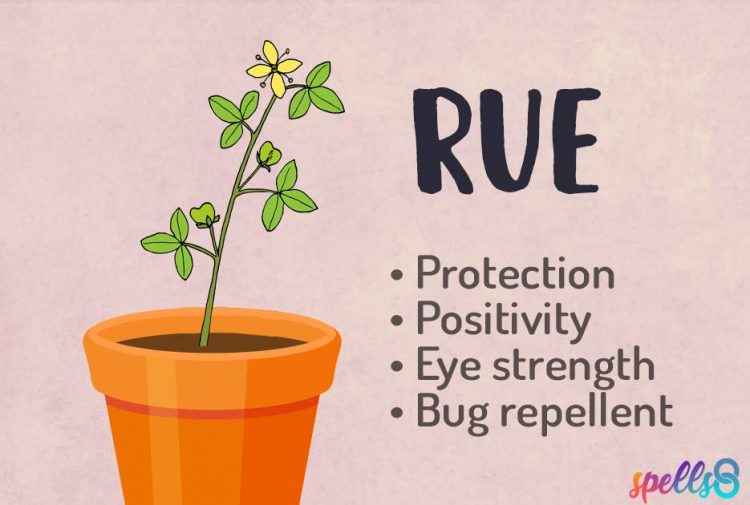 The word ruth is Old English for sorrow and remorse, and the verb to rue was to be sorry or to take pity – and rue commonly is called the herb of grace, memory, and repentance.

Rue was used by different ethnic groups in their folk traditions to make amulets against bad luck, envy and other negative influences.

You can, for example, strengthen the friendship between you and someone else by making a white cloth sachet with some leaves inside plus the photographs of each one.

Another way to use rue is by making an infusion which can then be used in household cleaning or spiritual baths. Rue will remove negative energies and at the same time reduce feelings of stress and anxiety.

Hanging the plant on the door sill is thought to repel hexes or curses that may have been cast at that home, or on the people who inhabit it.

To manifest the fulfillment of any desire, simply put yourself in a positive and calm state of mind, dedicate some time to meditation and visualization, and hold a rue leaf in your hands while affirming what you want for yourself.

Origin of Rue: The Balkan Peninsula, but naturalized in Southern Europe and cultivated worldwide.

Uses of Rue in Herbal Witchcraft

Rue (Ruta graveolens) is a perennial herb native to the Mediterranean region. Since antiquity, it has been utilized in magickal practice. Known also as the queen of herbs, rue has grey-green, multi-lobed leaves and a sharp fragrance that could almost be stinky. Its repugnant smell keeps cats at bay and during the Middle Ages, people hung rue as a talisman to ward of witches because cats did not enjoy the odor. Rue is linked to the planets Mars and Saturn and can be both masculine and feminine.

In ancient Rome, one way to protect yourself against the evil eye was to carry rue. Rue has a long history of protection in many different cultures. It has been carried in pouches, mixed into warm bath water, and infused into candle wax just to name a few. Many people carry a pinch of rue in a bag or hang it above their doors to ward off the evil eye. In Italy, the protection properties of rue have inspired people to create an amulet called Cimaruta [pronunciation: Chee-maruta] which contains a sprig of rue for protection. Practitioners today use rue to remove a jinx or protect against harmful magick by mixing dried rue with spring water and sprinkling it around the home.

Rue has the ability to attract positive energy. It can bring positive people into our sphere, especially when it comes to friendships. Rue attracts positivity whether in finances, love, or business relationships. While its main property is to protect, many modern practitioners use it to strengthen their auras by carrying a bit of the herb with them. Rue’s protective nature creates an energy shield from any negativity, which is why the Chinese carried it to counteract any negative thoughts or ill wishes from others.

While often found growing along the roadside or in waste areas, rue will surprise you with its remarkable health benefits. If gathered before the herb flowers, the fresh tops can be dried to help with many ailments. Rue contains the flavonoid rutin which strengthens blood vessels in the eyes1.

Rue is a mighty insect repellent as it works whether alive or dried. Many people plant rue next to other plants such as roses or raspberries to ward off pesky insects. In fact, the dried leaves are a very effective moth repellent. Rue is used to kill lice and fly larvae when made into a decoction and it can even eliminate parasitic worms2. This explains the practice of rubbing floors with rue during the Middle Ages in order to keep out fleas!

Rue is a toxic herb and should only be taken in small doses. The consumption of this plant should only be done in a controlled way in order to avoid poisoning. An excess of rue can cause vomiting and interfere with liver function. Avoid use if pregnant or breast feeding.

The expression “rue the day” was derived from the practice of throwing rue at an enemy while simultaneously cursing them. While the act of throwing rue has diminished, the saying has remained an integral part of our modern dialect. Rue has a rich history of protection and positivity throughout many cultures and is an important addition to any magickal practice.