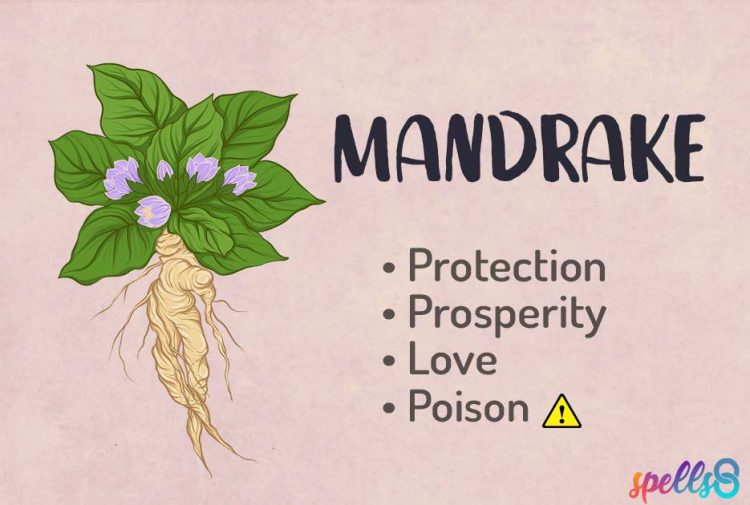 With a shape similar to the human body, mandrake is a plant loved by witches and feared by the peoples of different cultures through history.

Mandrake was widely used since classical Greece, when it was known as the herb of Circe, in honor of the famous goddess and sorceress whom Homer immortalized in his famous Odyssey. According to oral tradition, this plant was seen as a symbol of prosperity and good fortune.

It is a highly toxic plant, it can cause death if it is ingested directly, and it has activity through the skin, so it is unwise to handle its leaves, fruits and, above all, its roots.

The ancient inhabitants of Africa believed that it had healing properties and therefore they used it to wash their hands and feet.

The fame of mandrake is also linked to the Hebrew tradition, where the root of this plant was used as a powerful fertilizer. It is mentioned in the Old Testament, in the story of Rachel, the wife of Jacob, in which she was sterile and became pregnant after taking an infusion of mandrake.

One of the best known cases that encouraged the relationship between witchcraft and mandrake occurred during the trial of Joan of Arc. The judges accused her of wearing a mandrake root hidden in her clothes, which they believed gave her powers of divination. According to the legends, the mandrake root was used for invoking demons and performing divinations.

Mandrake has large, broad leaves and bell-shaped white flowers with a purplish tinge. It also smells quite unpleasant. The roots look a lot like a parsnip and can run up to four feet deep underground. For ancient people, the roots took on human characteristics as they were often depicted as a woman with bushy hair or a man with a very long beard. If the root split into two, it was thought to be female and if not, then it was male. The female roots were considered good luck and better to have when performing magick.

The botanical name Mandragora comes from the Greek word meaning “hurtful to cattle”. The plant was rumored to grow under the gallows of murderers and sprung forth from the blood that dripped from them below. When the mandrake root was harvested, it would shriek causing the harvester to die or go insane from the terrible noise. To avoid this awful fate, people would tie a dog to the plant when they pulled it up out of the ground so the dog would perish and not the human. Some legends say that mandrake could only be harvested after sunset and that a circle must be drawn three times around the plant using a magickal sword before it is harvested.

Diana of the Moon Incense

Diana She rules over unspoiled nature, and the boundaries separating wild from civilized, living from dead. This incense is blended to correspond to the Moon and the Lunar Goddess. It contains ingredients all ruled by the Moon.

A dried mandrake root will protect a home and bring happiness and prosperity. It is thought that leaving a piece of dried root on the mantle will also prevent demons from entering. If you place mandrake on top of money, it will make the money symbolically multiply.

The berries attract love when they are carried, and so does the root of this plant. They are also known to increase fertility and are part of many charms for this purpose.

It is best to leave mandrake alone as this plant is poisonous. Historically it was used for medicinal purposes, but today there are many much safer options available.

The root is a powerful emetic, meaning it makes you vomit. If used internally it is a hallucinogen. But it must be used with great caution, if ever at all. In large doses it can incite delirium and madness, even though many people once used as a sleep aid. However, it wasn’t used for your traditional, standard bouts of insomnia, rather it was only used for people who were in too much pain to sleep. Pieces of the root were also given for patients to chew on before they were about to undergo surgery back when modern drugs were not available.

For external ulcers, the leaves can be boiled in milk and then used as a poultice. If a person suffers from rheumatism, the roots can be soaked in alcohol and a paste can be rubbed on the inflamed area.

Mandrake root is a hallucinogen and extremely toxic. It should never be ingested as it is a very powerful emetic. If someone you know ingests mandrake, immediately take them to a hospital.