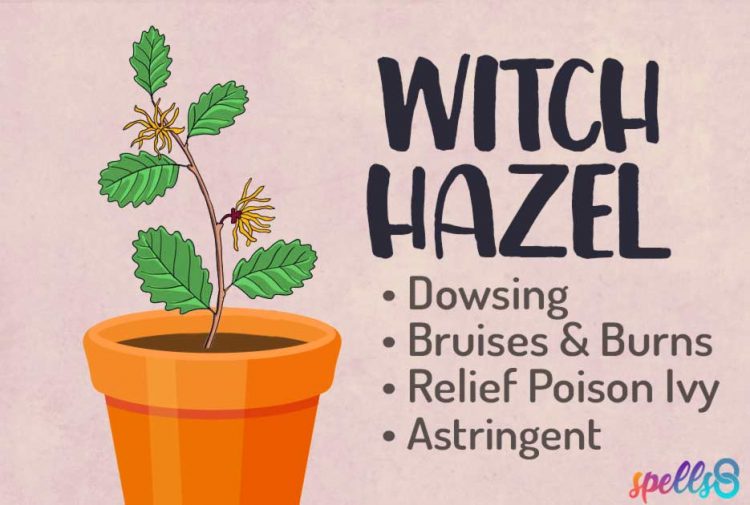 Witch hazel is prized for the color of its flowers that often appear among the snow-covered branches and which are highly fragrant. In temperate zones it is considered one of the main flowering shrubs during winter.

This winter flower also has healing and magical properties. Various American tribes were well aware of its medicinal properties in addition to some early settlers using it for dowsing, the practice of detecting resources.

The Iroquois used dried leaves to ease pain of sore throats and colds while the Potawatomi used witch hazel branches in their sweat lodges to ease their sore muscles.

Witch hazels are shrubs or small trees that produce a small fruit. This plant is native to America and was used by various Native Americans tribes such as the Iroquois and Potawatomi long before the Europeans arrived on the continent. The Iroquois used dried leaves to ease pain of sore throats and colds while the Potawatomi used witch hazel branches in their sweat lodges to ease their sore muscles.

The name witch hazel refers to the twigs rather than to what we now think of as witches. The Old English word ‘wice’ (pronounced witch-eh) meant pliant and bendable. The hazel part comes from its leaves likeness to the hazelnut tree as they are both broadly oval shaped and scalloped. Today witch hazel is most widely used in cosmetics and beauty products.

The forked branches of witch hazel are sometimes used for a type of divination called dowsing. Dowsing involves holding the branch by its two prongs and then walking slowly over an area. The branch receives transmissions from hidden objects that cause the holder’s muscles to involuntarily contract which in turn makes the rod bend or violently quiver. Most often this type of divination is used to find ground water, but it can also be used to find gemstones, metals, gravesites, and other objects that cause the earth to vibrate differently in that area.

Witch hazel extract is also called hydrosol which is made from the leaves, bark, and twigs. As an astringent, it is used for various skin conditions in order to reduce swelling and itching. As a daily facial astringent, it reduces redness, puffiness, or shiny skin. Witch hazel also helps to tone the skin. It can even help the random pimple disappear. Use a compress on tired eyes to eliminate puffy bags.

Keep witch hazel extract in your herbal first aid kit for minor cuts and abrasions. It can help reduce bleeding and encourage healing.

Dabbing a cotton ball soaked in witch hazel on bee stings or mosquito bites helps to draw out the venom and reduce itching. A strong tea used as a wash can also help outbreaks of poison ivy.

When the veins in the rectum swell and itch because of inflammation, witch hazel can help relieve the discomfort and pain. Soaking a cotton ball or cloth in witch hazel and then directly applying to the hemorrhoid can have an instantly soothing effect due to its anti-inflammatory effects. Its hemostatic properties also help to stop any bleeding.

Do a skin test to ensure you’re not going to have an allergic reaction to witch hazel before using on your body. Place a small dab inside your elbow and wait 24 hours for any sign of redness.