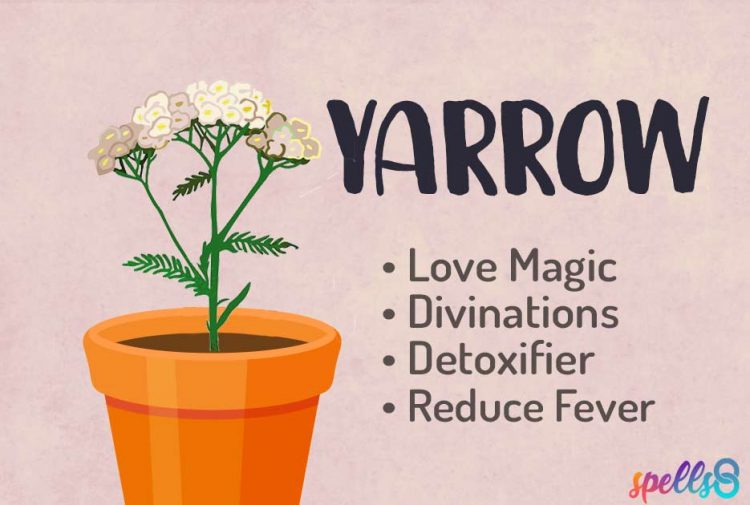 Yarrow will grow just about anywhere it can find good drainage and full sun. Its Latin name Achillea millefolium translates to Achilles’ thousand leaved herb, because this Greek hero used the plant’s extracts to treat soldier’s wounds in the battle of Troy.

Yarrow has been used for centuries in healing potions. Since the early days of farming, yarrow was planted in the fields to promote the growth of other edible crops since its presence makes them prosper. In this sense, yarrow is a true natural protective ingredient.

Yarrow is used for divination and love spells, especially when looking to improve communication.

Yarrow will grow just about anywhere it can find good drainage and full sun. Its Latin name translates to Achilles’ thousand leaved herb. Chiron, the centaur, taught Achilles, the Trojan war hero, to use yarrow in order to heal his soldiers when they were wounded in battle. One part of the myth says that when Achilles scraped the rust off of his sword, it caused yarrow to grow. Because of its healing properties and connection with soldiers, many soldiers carried a sprig of yarrow with them into battle.

But ancient Greece isn’t the only place with tales of yarrow. In China, Confucius told of how yarrow could brighten the eyes by promoting intelligence. Yarrow has been used by humans for over 60,000 years as it was even found in a Neanderthal burial plot.

Yarrow is perfect for communicating with loved ones, both in the physical and astral realms. During times of strife, it can help both people see things from the other’s point of view. And it is especially useful for communicating with loved ones that have passed through the veil. It is thought that hanging yarrow on your wedding night will make the love last for the next seven years. Use yarrow in a sachet to bring about love or add it to a bouquet to keep the love alive and passionate.

Yarrow is used for creating a protective personal energy field during divination. Add yarrow flowers to dream pillows to encourage prophetic dreams. It can be used as an incense or oil to cleanse the aura. Drink yarrow tea prior to divination to help the mind focus on a specific issue,

It is used also as a charm for pregnant women; keep it on the right side for easy labor.

If there is a fever or spots present in a disease, such as measles, yarrow is excellent at reducing its effects. Yarrow causes sweating which helps to break a fever. Place one ounce of dried leaves in two cups boiling water. An ointment can be made with yarrow and applied to the body for a headache or fever. The best remedy for spots or a fever is to soak in a warm bath full of yarrow.

For mild abrasions, apply an ointment or oil with yarrow essential oil. It has anti-inflammatory properties which are also great for relieving congestion, soothing muscle aches, and quieting arthritis.

Contraindications: Prolonged use of yarrow can cause photo-sensitivity. Do not use if you are allergic to ragweed. Pregnant women should not ingest yarrow.