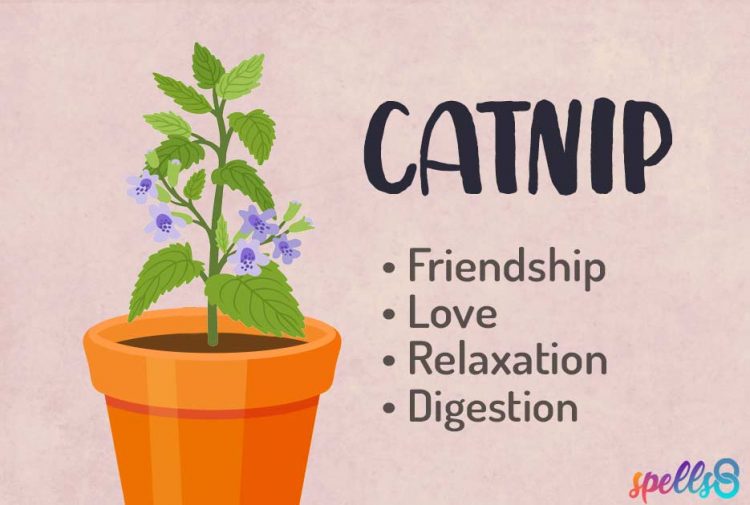 Used in attraction and animal Magick, Catnip is often used in love rituals, since it is considered as a magnet for good energies.

Native to Europe, Asia and Africa, it was brought to North America by settlers. According to popular tradition, you will always find felines where this plant grows. Its strong mint scent attracts cats, hence its common name.

Catnip is used in spells involving cat magic, beauty, happiness and friendship. You can make sachets or pouch with other supporting herbs and ingredients, such as rose petals for love, or ginseng for energy and passion.

Plant catnip outside your home to attract friendly people and positive energies. If a Witch gives catnip to their cat, a psychic bond will form between the two. 🐈

Catnip Talk in the Coven

Check out the following conversations in the Forum about catnip:

Catnip is a strong-smelling plant that can be found growing wild in most of the United States thanks to the colonists that traveled over with it to the Americas. As a member of the mint family, catnip has oval-toothed, dark green leaves and white flowering tops. But it is believed to come from an Etruscan city named Neptic. The name suggests it might have origins in the Latin word for cat, cataria.

There are ancient records showing the Romans used it as an herbal tonic to treat various ailments. It is most known for its effect on felines rather than humans but during the 1960s, catnip was smoked by people for its euphoric effects. It has even been used as a flavoring in sauces, soups, stews, and beverages including wines and liquors.

Psychic Bond with a Cat

When you give catnip to your cat, it can create a psychic bond between the two of you. In this way, you can both enjoy the moment and meld with one another. If you’re worried because your cat stays away from home too often, soak catnip leaves in a bowl of milk. Then leave the bowl outside for your cat to find when returning home. A cat’s love of catnip should make it an easy decision to stop wandering around so much.

Catnip is known for its use in love spells, but it isn’t for a romantic love. It is the love between friends, family, and animals. Combine catnip and rose petals in a sachets to promote friendship. If you want to have a friend for life, hold the catnip between your palms until it becomes warm. The next hand you grasp and hold will be friends with you as long as you keep the original catnip you used, in a safe place.

Catnip contains a chemical called nepetalactone in its leaves and stems, which is very similar to the valepotriates found in valerian. This is the chemical that causes odd behaviors in cats. These chemicals help to improve relaxation and are known to reduce anxiety. Catnip tea helps people to decrease their nervousness by calming their mood. It inadvertently helps symptoms like indigestion and insomnia which are commonly found among those with high levels of nervousness.

The oils in catnip have insect repellent properties. Some research has shown that applying catnip oil directly to the skin helps to repel yellow fever mosquitoes. Nepetalactone has been found to ten times more effective at repelling mosquitoes than DEET.

Not only does catnip help to relax the mind, but it also helps to relax the muscles. Because it helps the body and muscles relax, Native American tribes used it to relax muscle spasms and cramps associated with digestion. The Mohegan tribe made a catnip tea to help their infants with colic. Catnip encourages healthy digestive motility.