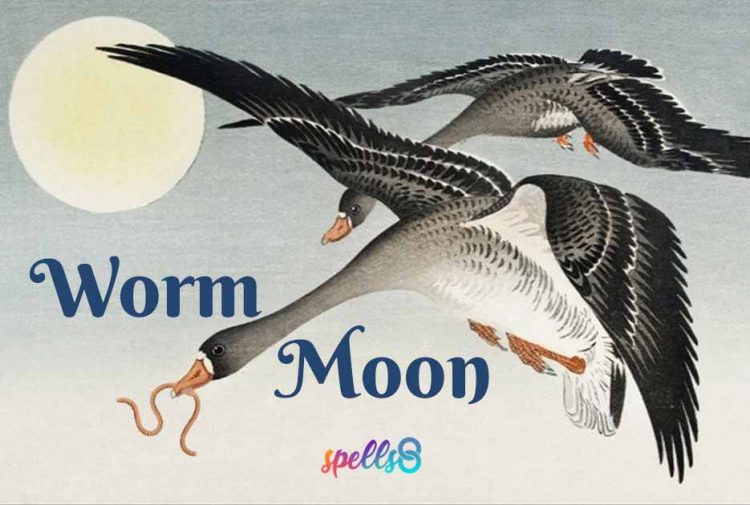 The Worm Moon, also known as Storm Moon (because worms typically come out after a storm) is the name given to March’s Full Moon. It is usually either the last Full Moon before Spring or the first one after the Spring Equinox, when we celebrate Ostara 🌷.

Why celebrate the Worm Moon with some Magic? In the Northern Hemisphere, March is the month of the worm. The “worm” here refers to grubs that emerge from their thawing winter hideouts, such as frozen trees, to feed the animals and birds in the Spring with abundant sustenance.

March is a time of balance in both hemispheres as the equinox brings equal daylight and nighttime to everyone in the world. 🌎 It is also a transitional time which marks the end of a season and the start of a new one.

The spiritual meaning of a Full Worm Moon spell is to embrace and honor the cycles in our lives. As you begin to see the first signs of the season around you, what seeds will you plant, and what do you intend to harvest later?

How does this spell work?

The best day for this spell is a Sunday or a Monday but you should preferably cast it on any of the three nights when the Moon is full in March. 🌕

This Full Worm Moon spell includes a simple candle ritual, a journaling page and a guided meditation to bring in renewal, restoration and manifestation.

If you want to fully align your ritual to each of the Elements as you invoke them, follow this Wiccan pattern over the crystal grid:

“Now you walk under the Full Moon, weightless, with a smile on your face, feeling its warm embrace.”

This PDF version comes with a transparent background so you can print it on any kind of paper you want and add it to your own Book of Shadows. Find more printable grimoire pages and more Moon Journaling Ideas.

When’s the next Full Worm Moon?

What are the effects of the Worm Moon?

The power of this Full Moon can enhance your efforts as you begin pursuing your goals for the coming months. Take advantage of it by really focusing on setting goals and drawing up plans!

Why is the worm eating its own tail? The Ouroboros is a Greek word meaning “tail devourer,” and it is one of the oldest sacred symbols in the world. It can be perceived as enveloping itself, where the past (the tail) appears to disappear but really moves into an inner domain or reality, vanishing from view but still existing.

This symbolizes the cyclic Nature of the Universe: creation out of destruction, Life out of Death. It can also be interpreted as a symbol for eternal cyclic renewal or a cycle of life, death, and rebirth.

According to the Farmers’ Almanac, the more northern Native American tribes knew this Moon as the Full Crow Moon, when the cawing of crows signaled the end of winter.

Watch: What to do on the Full Moon?

The full moon favors communication and social interaction. This phase is very favorable to deal with romantic issues, as it can be a true aphrodisiac.

What if I’m in the Southern Hemisphere?

The names of the Full Moons that we use originated in the Northern Hemisphere. But because people from Europe settled in both the northern and southern hemisphere, many of these moon names traveled with them to new places around the world.

In Australia, South America or South Africa, for example, it is common to celebrate Yule/Christmas in the summer because it’s practical (and perhaps more enjoyable) to celebrate it at the same time as everyone else in the world does.

You can follow the same lunar calendar in the Southern Hemisphere as is done in the North, if that makes sense to you. Or you can invert the order, see an example here. There is no right or wrong way to do it and the decision will depend entirely on yourself, your family, or your coven.