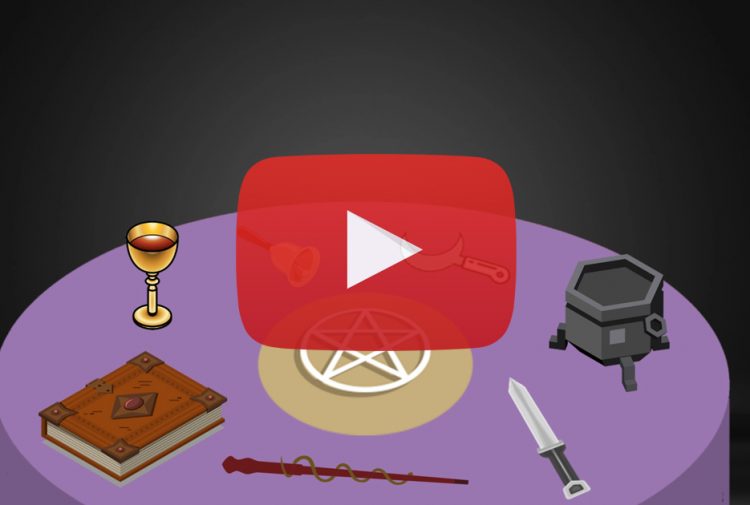 Watch this video lesson to learn about the traditional Wiccan tools of Witchcraft. While you don’t really need any specific tools to start casting spells, they will help you add meaning to your rituals and develop a more powerful identity in your path as a Wiccan.

You will learn more about Wiccan tools in this lesson of our Spellcasting 101 Course: What Do I Really Need to Get Started?

The art of witchcraft is enhanced by the use of magickal tools just like any religion since the dawn of time. Tools are a symbolic way to create sacred space. Each tool has a specific purpose during a ritual. Some tools have more than one purpose and can be supplemented for another if need be. It is important to note that practicing witchcraft can be done utilizing either all or none of these tools. Working magick comes from channeling the intent of the coven or practitioner and not necessarily from the physical tool that is being used. However, each of these tools enables the follower to channel their energy, intent, or focus more clearly for their own magickal working. But these tools are not required to be or practice Wicca. Many adherents choose some tools over others as a personal preference.

The athame is a small, double bladed knife. There are often magickal symbols carved into the hilt. The athame is used to direct magical power. It has many magickal uses including casting a circle, charging objects with energy, and as a symbol of the god during the Great Rite. The athame stands for the element of Fire. If an athame draws blood, it is to be destroyed or ritually cleansed as it is never to be used for violence. The athame is for cutting on the ethereal or spiritual plane.

A bell is a ritual tool used for invocation and banishment that represents the goddess. It is used to invoke the goddess as well as drive away negativity from a circle. It can be used to signal the beginning of a rite and/or to disperse the energy after the spell work is complete.

The boline is a white handled knife often having a curved blade. It is used in ritual for physically cutting objects in the earthly plane. It can be used for cutting ritual cords, cutting herbs, or inscribing candles. It is the practical, utilitarian knife used during a ritual.

A cauldron is a large metal pot often made of cast iron that has three legs. The three legs are symbolic of the three aspects of the goddess and the large bowl is symbolic of the womb. A cauldron has many uses in rituals including indoor or outdoor ceremonial fires, scrying, holding ingredients necessary for the ritual, or burning items during a ritual.

A chalice is a cup that is intended to hold a drink for ritual purposes. It can be made out of any material and it often holds wine, water, or other libations preferred by the individual or coven. It is either set upon the alter or the ground. It is the symbolic representation of the womb as it holds and contains the life-giving force. Together with the athame, it is used to represent sexual union during the Great Rite.

The five-pointed star represents the element of earth. It is often made of copper but can be constructed from clay, metal, or paper. Some Wiccans cast the circle by rolling it around the edges of their sacred space. The pentacle is a tool that is used to summon certain energies or spirits. Normally it is the centerpiece of an altar where it holds various objects such as mooncakes, salt, amulets, or charms.

The wand is a thin, straight stick that is held in the hand. It is generally made from a scared wood such as willow, birch, hazel, oak, or elder. It is generally one to one and a half feet long. Oftentimes it is carved or decorated with personal items such as crystals and gems.

There are many other tools used in magickal workings that have specific purposes to the practitioner. Each follower of Wicca will utilize different tools based on their own personal path.