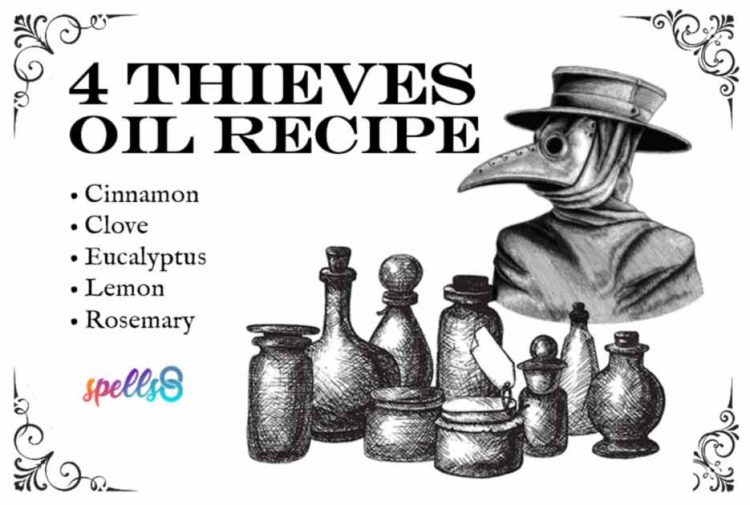 Thieves Vinegar is an ancient blend which has powerful antibacterial, antiviral, fungicidal, and immune-boosting effects. It dates back to the 14th century, when the bubonic plague, also known as the Black Death, resulted in the deaths of two-thirds of the world’s population.

The story goes that whoever had any contact with a sick person would become infected and their destiny was sealed with a fatal outcome. Corpses were left in the streets of the cities, as nobody dared to go near them.

However, not everyone who came into contact with the virus was contaminated. A famous trial occured against four thieves who had been stealing valuables from the deceased and the dying, using an apothecary’s trick to avoid the plague. The judge handling the case offered them forgiveness if they revealed their secret to prevent infections, and this is how the Four Thieves Oil received its traditional name.

The thieves explained that they were perfumers and engaged in the spice trade, so they told of a special preparation of aromatic herbs that allowed them to protect themselves from disease when they wore this special blend.

↓ Follow the recipe below and dilute it in water to use it as a floor wash. Find also an easy Thieves spray to clean surfaces at home. The recommended dilution is: 1 drop of Thieves Oil for each ounce of water. 💧

There have been many variations of the formula. One of the most popular today consists of a base of olive oil, cinnamon oil, clove oil, lemon oil, rosemary oil and eucalyptus oil. Here’s a recipe for making Thieves Oil at home, and scroll down to find a traditional recipe for DIY Four Thieves Vinegar:

How to make Four Thieves Oil: Traditional Recipe and Uses

How to make thieves cleaner from scratch (DIY). Four Thieves Oil has many uses – it can be used to purify the air, disinfect surfaces and protect from harmful pathogens.

How to make the oil

Step-by-step photo recipes to craft your own Witch apothecary cabinet, including oils, salves, bath blends and other simple and safe homemade herbal remedies.

How to Make Thieves Spray

Once you start making and using your own DIY thieves spray for cleaning, you’ll be hooked on how easy it is to concoct your own magickal potions at home.

Cinnamon (Cinnamomum verum) has a wonderful purifying essence, used for centuries in love charms. It warmth is calming and invigorating, especially comforting during the cold season.

Rosemary (Rosmarinus officinalis) has a fresh, herbaceous, sweet and slightly medicinal aroma. It is an energizing oil, which can be beneficial in helping to restore mental alertness when you experience fatigue. It is also a popular ingredient in skin and hair care products.

Clove (Syzygium aromaticum): its fragrance is stimulating and rehabilitating. It is an important ingredient in Four Thieves Oil, due to its wonderful immune-enhancing and antioxidant abilities.

Eucalyptus (Eucalyptus radiata): is refreshing and energizing. With a lighter scent, this variety is one of the most versatile of the eucalyptus oils and is suitable for topical use, diffusion, and even direct inhalation. It has long been an ingredient in some of our most popular blends.

Here’s a traditional version of the recipe for Four Thieves Vinegar, which uses herbs instead of essential oils:

This traditional recipe of Thieves Oil comes from the book published in 1910, René-Maurice Gattefossé’s Aromatherapy, apparently copied from the original recipe written on the walls of Marseille during the plague, and which was hung in the Paris museum in 1937. It also appears in The Scientific American Cyclopedia of Receipts, Notes and Queries.

This PDF version comes with a transparent background so you can print it on any kind of paper you want and add it to your own Book of Shadows. Find more printable grimoire pages.

Thieves Oil has several magic uses: It can be used to purify the air with an infuser, or even adding a few drops in a saucepan with boiling water so that the molecules come into contact with the environment.

It can help disinfect surfaces and you can even wear it as your own protective perfume. It also goes well with any good luck spells, healing, or protection magic you may wish to do.

According to Essential Oils Desk Reference (4th Edition), a 1997 study was conducted by Weber State University on this formula, replicating the original Thieves Oil recipe. They demonstrated its killing power against airborne microorganisms:

“One analysis showed a 90 percent reduction in the number of gram positive Micrococcus lutes organisms after diffusing for 12 minutes. After 20 minutes of diffusing, the kill-rate jumped to 99.3 percent. Another study against the gram negative Pseudomonas aeruginosa showed a kill rate of 99.96 percent after just 12 minutes of diffusion.”