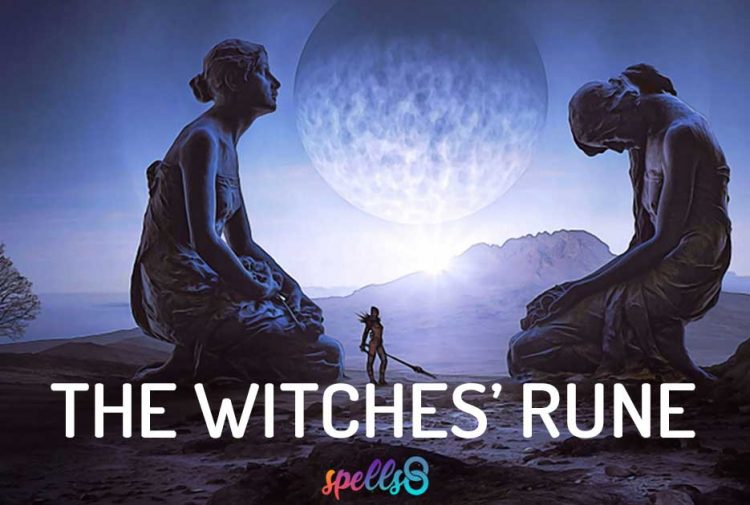 The Witches’ Rune is a traditional chant, used to raise the cone of power. This is a way to raise energy for spells and other ritual workings, whether in a group or as a solitary practitioner.

Written by Doreen Valiente, this is a spell-poem designed to produce a Magickal effect through the power of its language.

Chant Along this Pagan Prayer

Doreen Valiente wrote a wealth of literature for the Craft in her lifetime, such as the Charge of the Goddess and a version of the Wiccan Rede. If you ever need a powerful chant or invocation to raise power into your work, the Witches’ Rune is a great one to memorize.

Darksome night and Shining Moon,
East, then South, then West, then North,
Harken to the Witches’ Rune:
Here come I to call thee forth.

Earth and Water, Air and Fire,
Wand and Pentacle and Sword,
Work ye unto my desire,
Harken ye unto my word.

Cords and Censer, Scourge and Knife,
Powers of the Witches’ blade,
Waken all ye into life,
Come ye as the charm is made:

Queen of Heaven, Queen of Hell,
Horned Hunter of the Night,
Lend your power unto the Spell,
Work my will by Magic Rite.

If the chant is used to reinforce a work already begun, end with this:

By all the power of land and sea,
by all the might of moon and sun,
What is my will, So mote it be,
What I do say, It shall be done.

This powerful prayer is frequently used during Wiccan rituals. Coveners in the meeting may perform a slow dance to the Witches’ chant. Other versions of The Witches’ Rune have been published, such as one by Scott Cunningham and another one by Raymond Buckland.

This PDF version comes with a transparent background so you can print it on printer-friendly parchment paper (Amazon) and add it to your own Book of Shadows. Find more printable grimoire pages.

The Elements of the Witches’ Rune

This power chant is a spell on itself. The first verse creates a fairy-tale setting with a Moon shining bright in a dark night. 🌕

The Quarters are reaffirmed through the four elements, Earth, Water, Air and Fire.

The traditional Tools of the Witch are listed and the Witch themselves commanded: Work ye unto my desire. A predefined intention can be brought to attention at this stage.

The Wiccan God and Goddess are invoked too, along with other realms of duality: Land and Sea, Sun and Moon.

So mote it be! and the charm is made. The power becomes almost visible.