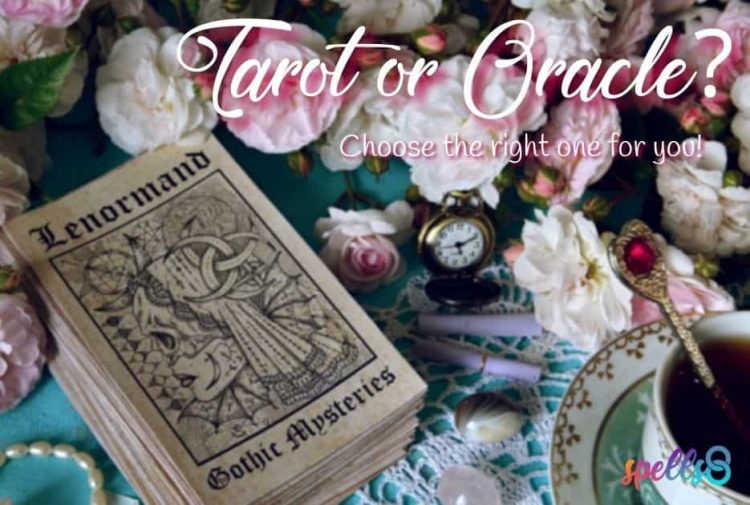 Out of all the divination methods out there, reading the cards is the most popular. If you are in any witchy spaces online, you will often find beautiful images of tarot cards, oracle decks, and other divination methods. There are many different types of card-based divination methods but the two most popular are tarot and oracle. When it comes to choosing the method that might be right for you, there are a few things you may want to consider. In this post, we will go through what a tarot deck is, what an oracle deck is, the possible pros and cons of each, and how you might choose the one that is best for you.

What Are Tarot Cards?

The tarot cards we know today as a method of divination actually have their origins in an Italian card game known as Tarocchi. By the late 16th and early 17th centuries, people began using tarot for divination, though it was a much more simple system than it is today.

Tarot decks generally consist of 78 cards split into two categories. The first category is the Major Arcana — 13 cards that tell the story of The Fool through his life and journey to The World. The second category is the Minor Arcana — four suits of cards each with 14 cards. The suits are cups, wands, swords, and pentacles.

What Are Oracle Cards?

An oracle deck is less structured than a tarot deck. Our modern oracle cards might be inspired by the Lenormand deck, a deck of cards created by Marie Anne Adelaide Lenormand in the late 1700s. An oracle deck can have as little or as many cards as the creator of the deck desires — yes, as little as five cards and as many as 100 cards and more!

For an example of different oracle cards, you might enjoy browsing our Oracle Card Reading thread in the coven!

How Are They Different?

There are a few key things you should keep in mind when choosing a card-based divination system to use. Since each one works in a different way, getting to know the basic style of use is important when making your decision. You may also want to consider your own patterns of behavior, intuition, and capability when selecting a card-based divination system. Let’s go over a few different pros and cons with each system.

The structure of a deck correlates to how the deck is arranged. When you choose your divination method, you may want to reflect on how you feel about structure. Do you like things to have a place? Do you prefer a method and story to the cards? Or does structure not matter to you that much?

Oracle cards only follow the structure that their creator has given them. Every oracle deck you encounter will likely have a different structure if they even have one at all. Many oracle decks are not even split into separate categories. It all depends on the artist!

Believe it or not, some divination systems have rules in place that correlate to their structure. Of course, this is going to depend on the deck in question! You may want to reflect on how you feel about rules in your divination method. Would you find them helpful? Or would they be a hindrance to your intuition?

Since tarot cards have a structure, many tarot readers would also agree that tarot has rules to follow during readings. These rules pertain to imagery, reversals, symbols, and meanings.

Since oracle cards do not always have a structure, there tend to be less rules to reading them, if any at all. This can make reading oracle cards more flexible. It also lends to more comfort for those that struggle with structure.

Cards in divination are all imagery. The artwork used on the cards usually relates to the meaning of the card in one way or another. This can be something as obvious as three swords through a heart or as obscure as a sword in a stone with blue smoke around it. You may find it helpful to reflect on different art styles. Do you prefer realistic art? Or maybe you prefer more abstract art. These will matter when you choose your deck!

The imagery within modern tarot cards are heavily based on the Rider-Waite Smith deck. That deck’s imagery was heavily influenced by Kabbalah. Therefore, it stands to reason that each card has a pre-determined meaning given to it based on the symbols and images on the card. Each suit of a tarot deck is also based on a classical alchemical element. The suit of cups, for example, corresponds with water and all things emotional and intuitive. Each number in tarot also has a meaning. For example, the Ace card is generally about new beginnings.

The imagery in oracle decks is going to vary widely depending on who created the deck and the theme they chose. I have seen oracle decks created based around food. There are even oracle decks based on crystals, their colors, and their meanings. Many times the imagery associated with different oracle cards plays into the meaning of the card itself. This is not always the case, though, and sometimes the images are there to give you an intuitive message or to look pretty. In any case, no two decks will generally ever be the same, though some may be similar.

The reason we seek a divination method is to tap into our intuition and receive messages from our guides, Gods, higher-self, and others there to help us. Some divination systems are more intuitive than others. It might be helpful for you to reflect on how in tune you are with your own intuition before choosing a card-based divination method.

We know that tarot has rules and structure. The imagery, combined with the predetermined rules and structure, does not always lend itself to being read intuitively. In fact, there are some tarot readers who say that you should never try to read tarot cards intuitively because you might be dismissing the message in the symbols you have been shown. The jury is still out on that, though, and there are other tarot readers who claim to have amazing accuracy when reading tarot intuitively.

Since there is not usually a structure or rules given to oracle cards, it stands to reason that these decks are more intuitive. The images on the cards, the word or phrase given to the card, and the way the card makes you feel all lend to the message you receive when reading with oracle cards. Oracle decks are generally good for those that do well with their own intuition rather than the symbolism that someone else connects with a specific meaning. Again, these will vary.

How good is your memory? Some card-based divination systems will require you to remember the meanings of different symbols, orientations, and numbers. If that feels overwhelming, you may want to reflect on how your memory can play a role in your divination.

Are you ready to memorize 78 card meanings? Or how about 156 card meanings if you plan on reading reversals? You may only need to memorize the Major Arcana and the general meanings applied to the suits and their numbers, including the face cards. However, since tarot has rule and structure as I have already mentioned, many people will want to memorize the meanings of the tarot cards to get the most out of their reading.

Memorization is usually not needed when you read with oracle cards. Since every deck is different and there are no rules or structure — unless the deck creator as given any — there is no need to memorize the meanings of your oracle cards. However, this does not mean that you can’t memorize them if you want to. As mentioned above, oracle cards may be better for those looking to connect with their intuition rather than memory of symbols.

Both tarot and oracle tend to be read in a similar fashion. You may choose to use elaborate spreads such as the Celtic Cross. You might even choose to go very simple and pull one or two cards for your question. Both styles of card-based systems can be read in the same manner. Whether you choose to use tarot spreads or not will be a personal decision. You just need to choose the style that works best for you.

With all of these differences in mind, you will have to decide for yourself the best route to choose. Are you someone who thrives with rules and structure? Then tarot might be for you! Or if you instead like to wing it with your intuition, you may want to choose an oracle deck with imagery you like!

Whichever system you choose, the important thing to remember is that you choose one that speaks to you. It is also okay if you choose one now and realize that it does not suit you. It is okay to change your mind and the way you read cards.

You might enjoy these posts about divination. Don’t forget to join Spells8 and share your divination experiences with the coven!

Do you know that birds bring messages from Spirit? In this post we will explore some types of divinations, both traditional and not-so-traditional. From Folk Magick to modern-day Wicca. Let’s start with some little-known divination methods!

Which method works for you?

For all creative souls — be you artists, performers, writers, chefs, etc. or simply crafty in your Craft — this motivational spell that draws on the complex symbolism and emotions of tarot/oracle cards is for you!

Walter was kind enough to share with us their Threads of Fate oracle deck! This beautiful black and gold oracle deck is fit for the Gods! Hop into the forum to get a better view of these cards and some tips for reading oracle cards.