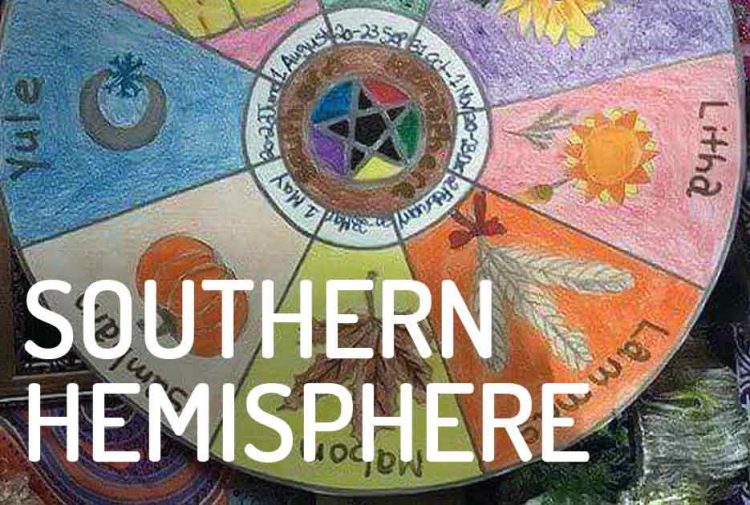 Celebrating the sabbats and following the Wheel of the Year as a new Witch, Wiccan or Pagan can be overwhelming. Especially when you get bombarded with information for the Northern Hemisphere but you live in the Southern Hemisphere! 🌎

Growing up in South America, I knew celebrating Halloween in the spring didn’t make much sense. My name is Francisco and I now live in the US. Where I’m from in Argentina, it is very common to celebrate Christmas/Yule in the summer 🎄🏊. This is due to historical reasons (settlers and immigrants bringing their traditions from Europe) but also for practical reasons: after all, it’s much easier to join in the celebrations and follow along with everyone else in a globalized world.

Following a Nature-based spiritual path means honoring the natural cycles of our environment. But, as you probably know, the standard dates for seasonal celebrations in the North do not match the seasons in the Southern Hemisphere.

But it doesn’t have to be that way. It will take some effort, but it is possible to turn the Wheel of the Year around and celebrate in tune with the natural cycles of Earth, as we see them and feel them.

That’s why Wiccans and other Pagans in the Southern Hemisphere generally choose to advance the sabbat dates by six months to coincide with their local seasons.

Here’s a printable page you can add to your Grimoire or Book of Shadows, with the traditional dates of each sabbat adjusted to the Southern Hemisphere.

Circle Casting in the Southern Hemisphere

If you’ve watched our lesson on Sacred Circles, you already know how important circles are in Neopagan and other Earth-based paths. While casting a circle is a very personal ritual and there are no hard rules, our circle casting guide comes from a Eurocentric (Northern Hemisphere) tradition, so it’s done clockwise.

Circles are traditionally drawn “sunwise”, which in the North means “in a clockwise direction”. This is because standard clocks were invented in the Northern Hemisphere and that’s the direction the shadow of a sundial moves in the North. If you are in the Southern Hemisphere, you may want to cast your circles going the other way around: counter-clockwise or against the movement of the clock. In other words, rotating to your left.

Get inspiration in the Infinite Roots Coven, the active community of Spells8:

The phases of the Moon in the Southern Hemisphere match the phases in the Northern Hemisphere, so you don’t have to worry about changing your rituals if you are working with Lunar Magic.

However, the names of the Full Moons that we use for our Esbat celebrations originated in the Northern Hemisphere. But because people from Europe settled in both the Northern and Southern Hemisphere, many of these moon names traveled with them to new places around the world.

You can follow the same lunar calendar in the Southern Hemisphere as is done in the North, if that makes sense to you. Or you can invert the order. There is no right or wrong way to do it and the decision will depend entirely on yourself, your family, or your coven.