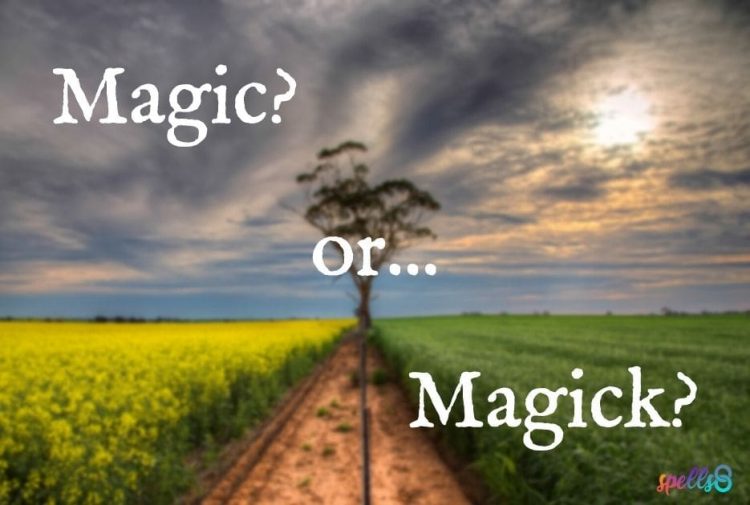 Many individuals are beginning to become interested in the world of witchcraft, and they all often stumble across a common question. That question is “What is the difference between magic and magick?” Is it just a cultural spelling difference or does it have a meaning? While it does not seem like there could be such a drastic difference between these two words, in the world of witchcraft there is. Some practitioners couldn’t care less about how the word is spelled and just focus on the purpose of their craft. However, to some practitioners, this difference is extremely important within their practice and the contrast is worth taking note of.

The two words magic and magick are often used interchangeably. However, the two words have two different meanings altogether in the occult community. According to the Merriam-Webster Dictionary, the word magic has three different listed definitions. These are as follows:

In the witchcraft community, we often use the word magick — the one with a ‘k’ — to differentiate between stage magic and magickal practices such as witchcraft. For this reason, we will use the third definition of the word magic — the art of producing illusions by sleight of hand. This type of magic encompasses various types of magic tricks that are performed by a magician to a crowd or an individual for entertainment purposes. For example, such tricks could be pulling a rabbit out of a hat, card tricks, or cutting someone in half.

On the other hand, the word magick holds a deeper more spiritual meaning. Magick is not something that is meant for any one religion, group, or individual. It is a practice that can be shared with any individual willing to put in the work! Magick is said to be anything that moves an individual towards their “True Will”.

These natural forces could include but are not limited to manifestation. Manifestation is the practice of thinking, speaking, or writing your desires into fruition as if your desire has already come to you. An example of this in magick could be anything related to bringing you to your highest self, such as landing your dream job which would then lead to your destiny. Fulfilling your destiny can then bring you to your “True Will” which is essentially what magick is all about. Who do we have to thank for this new connotation of the word magic? That would be Aleister Crowley.

Who is Aleister Crowley?

Aleister Crowley, the man who coined the word magick, was a man of many occupations. He was known to be an occultist, ritualistic magician, and poet. He was also known by a few names including The Wickedest Man in The World and The Beast. Numerology played a significant part in Aleister’s practices. He lengthened the five-letter word magic to a six-letter word for a few significant reasons.

The number six held a significant role throughout his life. Throughout his writings, he has numerous mentions of hexagrams, six-sided and six-pointed shapes. One of the few nicknames given to him was “The Beast”. As many of us know, it is thought that’666′ is the number of The Beast or the Devil.

As for the letter “k” at the end of the word magick, this held a deeper significant meaning to Crowley. The letter “k” is the eleventh number in the alphabet, and when Crowley’s father passed away, he was just a child at the age of 11. Crowley also founded the religion of Thelema which means “True Will”. “True Will” is the overall ideology Aleister Crowley intended for his newfound ideas of magick.

What Is the Religion of Thelema?

“The Book of The Law”, Thelema’s sacred text, formed the base foundation for the ideologies of Crowley’s practice of magick. This means a basic understanding of the ideas of the religion aids in understanding the ideas of Crowley’s form of magick. Crowley believed himself to be a prophet. He claimed that during a spiritual experience in Egypt with his wife, Rose Kelly, an other-worldly being bestowed all his knowledge upon him. This extraterrestrial being revealed himself to Crowley by the name Aiwass, so Crowley also named his wife and Aiwass as authors on the cover of “The Book of The Law”. Thelema’s sacred text outlines some of the major beginning ideologies of magick such as, “Do what thou wilt shall be the whole of the Law.” This quote essentially means do what you can to reach your “True Will”.

What sets magick aside from magic is the purpose behind the action. Everything is about intention. Magick is not about a staged illusion to entertain other individuals. Rather, it is the visualization of your destiny and uses of the energies of nature to bring forth your most divine energy. Magick is spelled with a “k” to separate the illusion from the power of purpose. You can change your life by using your spiritual energy as well as your surrounding natural energies and elements.

So, which do you choose?

Whether you choose to use the word magic or magick, the choice is entirely yours. Choose the word that best suites you regardless of how it was formed or the third definition of magic. In witchcraft and magickal spaces, everyone will know what you mean.

Are you a member yet? Sign up now to take one of our many witchcraft courses! Learn about the history of different witchcraft practices, green witchcraft spells and potions, and working magic with astrology!

Becoming a Witch is a very personal decision and a path of self-knowledge and self-discovery. This Video Course helps Beginner Witches develop an Eclectic Practice.

This Free Online Course will teach you the Magickal and Medicinal properties of the most common herbs and plants used in Herbal Witchcraft.

Magic in the Moon: 12 Zodiac Meditations

Synchronizing your Magic to the transits of the Moon can add a powerful symbolic value to your practice. Discover the energies of each zodiac sign as you enter their realms.