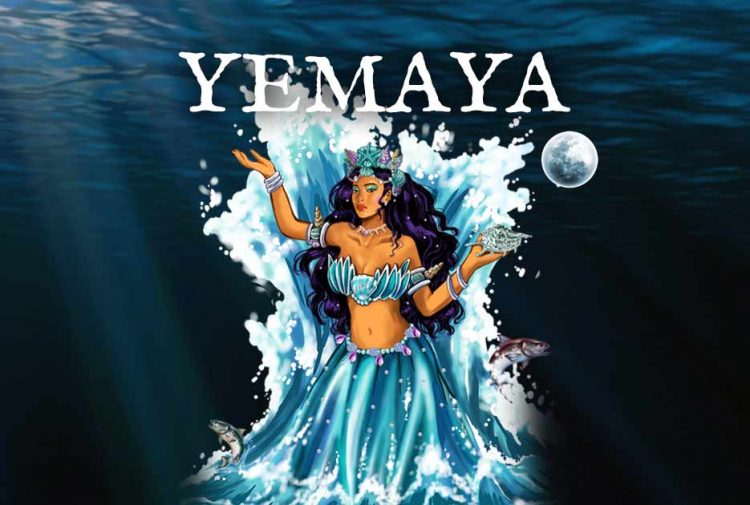 Yemayá (also known as Yemọja or Yemanjá) is a Yoruban river spirit. She is an Orisha, a guiding spirit of the rivers sent to aid humanity. When the Yoruba people were enslaved by colonizers, Yemayá also merged with the Virgin Mary in syncretic practices. in the Americas, the Orishas are the deities of syncretized religions such as Santería, Umbanda and Candomblé.

What does Yemaya mean? Yeye is a word tahat means “mother”; Omo means child, and Eyá means fish. By combining these words we get a name that means “mother of all marine life”, this is why she is invoked to bless pregnancies and motherhood, and is associated with everything in the sea.

Yemaya, “Goddess” of the Ocean

As an Orisha, Yemayá is a deity, more importantly, she is the mother of all Orishas. As an Orisha of the sea, Yemayá has associations with nurturing, tempestuous anger, and fertility. Her anger can be as violent as any storm-lashed sea, but she has a caring side to her as well. The sea is often associated with life and fertility, as well as mysterious depths, all of which Yemayá embodies.

Myths and Stories of Yemayá

Yemayá was born to Oludumare, the Supreme Being in the Yoruba religion. Oludumare tasked Yemayá with assisting the Orisha Obatala with the creation of humans. Leaving the dwelling place of Oludumare, Yemayá slid down a rope with sixteen other Orisha and engaged in the creation of mankind.

Yemayá often has husbands in the many depictions of her. In one depiction she might be married to Obatala, the Sky Father and begetter of humanity, while in another she might be wed to Oko, the Orisha of iron and rum-making.

Along with her marriages, she gave birth to many children. Among them are Ogun, another Orisha of iron and rum-making; Sango, owner of the terrible and fearsome thunderstone; Oya, the Orisha of winds, storms, and rebirth; and Osun, the Orisha of fertility and love. It is said that she helped Sango bring an end to the practice of twin infanticide in the country of Nigeria.

In other stories, she gave birth to the sun, moon, and several rivers. When her water broke during a pregnancy, out gushed a flood that created rivers and streams. Another story of her water breaking into a flood involved her rape at the hands of her son. She fled to the top of a peak, then brought terrible curse after terrible curse down upon her son, which struck him dead. Suffering intense grief, she killed herself and gave birth to fourteen Orisha, and her water broke and flooded the world.

Yemayá has many other children. Stories of Yemayá also depict her as having long breasts, resulting from the numerous children she nursed. A few stories recount instances of Yemayá turning herself into a river in response to being insulted over her body by others.

Spirit of Rivers and Sea

Yemayá serves as the patron of the Ogun river (in Nigeria), although she is not limited to that particular body of water. Her followers may worship Yemayá at any feature of running water. She is depicted as a mermaid, capable of venturing into any body of water freely.

The Yoruba see Yemayá as the patron spirit of pregnant women. She watches over them and protects them, ensuring a safe labor. She is also associated with amniotic fluid, keeping her children safe against the harsh dangers of the world. Yemayá also picks students, whisking them away to her undersea home. After seven years, the student will re-emerge, having learned of Yemayá’s magics and healing techniques.

The shells are placed either on a table or a mat, and the patterns of the shells must be comprehended through a process known as Odu. The priestess or priest will question the Orishas that they seek answers from, then cast the shells and interpret the resulting configuration.

The Orishas are said to answer the priest or priestess by interpreting how the shells land on the table. Yemayá, depending on the story, either was given the power of merindinlogun, or she stole it. She then taught other Orisha how to throw the cowrie-shells to divine meaning from them.

Another storiy tells of how Yemayá tricked her way into learning how to do this divination. According to the story, she hid herself behind a door while her husband performed divinations with a epuele, a special chain used in divining. Women were kept from doing this, but Yemayá proved a natural at divining and Orula agreed that she could divine using the cowrie-shell method.

Yemayá has another deity associated with her. Olokun is another Orisha associated with water and androgyny. While Yemayá has dominion over the surface of the ocean and the life thereupon, Olokun is the Orisha of the depths. They complement one another. While Yemayá is the goddess of life, none may return from Olokun’s depths alive. The Brazilian religion of Candomblé places Olokun as the parent of Yemayá.

Once, Olokun was angry because he felt that humanity did not properly pay him respect. He sent massive wave after massive wave to batter the land and those who lived upon it. The people on the land were terrified, as they saw waves the size of mountains bearing down on them. They began to run in fear, thinking that their lives would shortly end. Yemayá, distraught at Olokun’s callousness, interceded on behalf of humanity. She talked him down from his anger. As Olokun’s rage quelled, the waves he sent to the land began to withdraw back into the ocean, leaving behind pearls and coral. The humans took these as gifts, grateful to Yemayá.

• The number 7 belongs to her, representing the seven seas; her devotees wear seven silver bracelets, and she is often seen wearing full skirts with seven blue-and-white layers.

• The Moon: According to some stories, Yemayá created the moon to save the sun from becoming extinct. In her association with the seas, Yemayá, through the moon and its phases, together with the force of the wind, which stirs the waters, would control the tides.

• Cowrie shells: Besides being used in divinations (casting shells), their white color indicates purity and good character. The cowrie shells symbolize wealth, because they were once a medium of economic exchange. They are also a symbol of the mind that God puts into the head at birth. The Yoruba use the head as a metaphor for supremacy and chieftainship.

After slavers brought slaves to the New World via the Middle Passage, Yemayá’s presence increased in the Americas and the Caribbean. Again, Yemayá was originally known as Yemọja, with Yemayá being one of her names she came to be known by in the New World.

The enslaved worshippers asked Yemayá to bring ease to their suffering, and she watched over them during their brutalized lives. The enslaved would also ask for the mercy of Olokun, praying that the god of the depths would aid their wayward kin.

Despite efforts on part of the Church, Yemayá, along with the other Orisha, survived in folk tales and traditional practices, giving credence to her fluid, adaptive traits. Some of the Orisha even merged into Roman Catholic saints. She is also worshipped in Vodou, taking on the form of a moon goddess. Some believe that Yemayá’s origin goes even further back than the Yoruba, all the way back to the powerful Goddess Isis of Egyptian mythology.

Because the Orishas are deified ancestors of the Yoruba, most modern traditions follow an initiation-based system, which is communal and hierarchical. Divinations and other communications with the spirits are performed by trained priests (such as Santeros or Babalawos), and the interactions should be done through someone who has an Orisha assigned.

Whether or not Yemayá traces all the way back to Egypt, it is undeniable that she possesses great power. While some individual practitioners may choose to make offerings in nature, it is traditional to visit a common altar or shrine in a temple with an ordained priest.

Visiting a source of water such as the ocean or a river is a good way to connect with Yemayá. Go to the beach, offer white flowers to Her, or leave the offerings near a river. Because her number is 7, a traditional offering consists of seven copper cents.

Perfumes, jewelry, combs, mirrors, images and statues of mermaids, statues of herself, strings of fresh-water and salt-water pearls, and corals make appropriate offerings, as do sea fans, seashells, white stones from the beach, starfish and seahorses. Blue or white lace fans, crystal beads, flowers and food.

There is a 17-day-long festival in Yemayá/ Yemọja’s honor in Nigeria, where devotees sing and dance. The history of the festival stretches back for as long as its celebrants can remember. October 31st is the grand finale of the Yemoja Festival in Ibadan, when different groups of orisa devotees dance to the rhythm of thrumming drums in front of the Yemoja Temple.

Every February 2nd, thousands of followers from all over South America flock to the beaches to pay homage to Yemayá. The coast is dressed in light blue and white to celebrate it and the beach is transformed into a place of worship. People light white and blue candles along with offerings. There are lines to receive healing from the ‘paes’ or ‘maes de santo’, the priests of Umbanda and Candomblé, the religions that venerate Yemayá in Brazil and Uruguay.

In Havana, Cuba, Yemayá is celebrated on September 7th. It is common for regla de ocha initiated priests and priestess to keep a vigil for Yemayá on September 6th which is called vísperas.