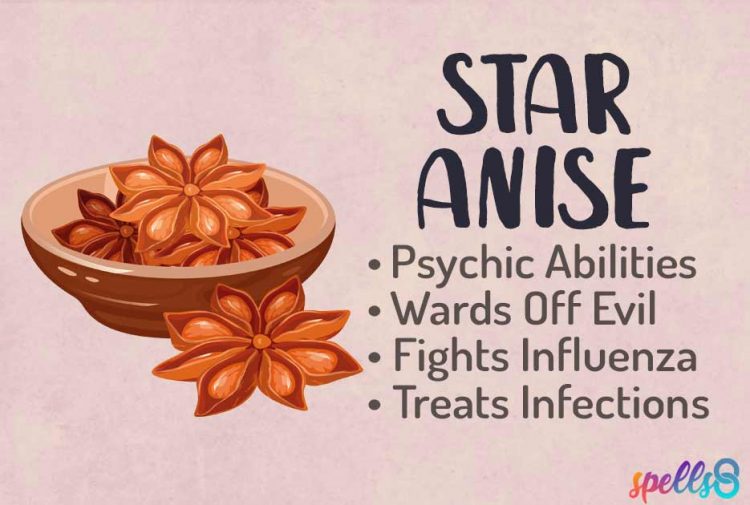 Star anise is a plant that is normally used for culinary purposes but also has medicinal and even spiritual benefits. Its oil and seeds are generally used in spells, but the root and leaves are also very useful, especially for medicinal purposes.

It is a good idea to place star anise seeds under the pillow to ensure a pleasant night of sleep without nightmares. In addition, it will help us with visualization during meditation, increasing our psychic powers.

Uses of Star Anise in Witchcraft

Star anise is used to cleanse living spaces of negative energies and promote well-being in the home. It is also used to bring balance and unblock relationships or businesses where energies do not flow and remain stagnant.

Another use given to this spiritual herb is to purify the body, drive away negative energies and ward off the evil eye. A recommended use of star anise is taking a hot bath using the green leaves of the anise flower.

A pod with all eight seeds intact makes an excellent pendulum that you can use to divine practical wisdom for your daily life.

When star anise seeds are burned in incense, they help increase and enhance the psychic powers of the person who breathes it.

Be careful because drinking too much star anise tea can be intoxicating, but in small quantities it is very beneficial for meditation, relaxation and the evocation of beneficent spirits. Used as a talisman, star anise is very powerful to ward off evil spirits, evil forces and the evil eye.

Star Anise grows on an evergreen tree that is a member of the magnolia family. This tree primarily grows in China and Vietnam. The fruits are picked before they ripen, then allowed to dry around seeds that are arranged in the pattern of an eight-pointed star.

As a spice, star anise is a staple in Chinese, Thai, and Vietnamese cuisine. It’s also used to treat a broad range of issues in Traditional Chinese Medicine. It was brought to Europe in the 17th century, where it was used to enhance fruit preserves, jams, puddings, and syrups.

In contemporary times, oil that is extracted from the fruit is used in mouthwash, perfume, toothpaste, and cosmetics. A tincture is often made for medicinal purposes.

Star anise is an excellent herb to carry and to use ritually for spiritual protection, good luck, and to enhance psychic abilities. It also possesses powerful properties that protect against bacterial and fungal infections.

A Japanese variety of star anise, which is poisonous, is often planted around tombs and temples. The bark is burned as incense.

Burn the seeds as incense during your divination practice to enhance your communication with spirit beings and the celestial realms. This will be particularly effective if combined with a New Moon ritual.

A pod with all eight seeds intact makes an excellent pendulum that you can use to divine practical wisdom for your daily life.

Place one seed pod in each of the four directions on your altar to imbue it with power.

Wear the seeds as beads around your neck or wrist to protect you from negative forces while traveling.

In Chinese numerology, eight is the number of good luck. Wearing star anise as beads or carrying the pods in your pocket will bring you good luck on the road.

Extracts and essential oils of star anise have proven effective against the fungus that causes yeast infections in laboratory studies. It can also be used to treat other fungal infections including athlete’s foot and jock itch.

Shikimic acid, the active ingredient in Tamiflu and other medications that treat the flu is extracted from star anise. When combined with a natural plant pigment called quercetin, shikimic acid significantly boosts the production of immune cells.

A test tube study proved that star anise is effective in blocking the growth of E. coli, which can cause diarrhea and pneumonia. It has also proven effective in fighting 67 strains of antibiotic-resistant bacteria, including pathogens that cause urinary tract infections and ear infections.

Take care to avoid using Japanese star anise. This is a different plant that is poisonous if consumed.

This herb has not been thoroughly tested for people who are pregnant or breastfeeding.