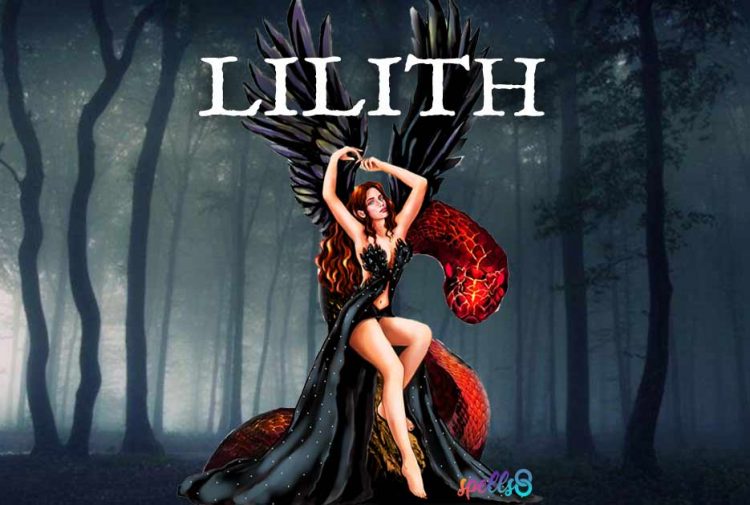 The Goddess’ Temple: Myths & Symbols of the Divine Feminine in History Lilith: Symbols, Energy and Worship of the Dark Goddess
Bookmark

Lilith’s origins and essence are uncertain. She is considered a primordial being, a demon, a vampire, a Goddess and a sorceress, depending on the path you choose to follow. Her appearance is that of a very beautiful woman, with long red hair, and sometimes winged.

In Neopaganism and modern occultism, Lilith is typically regarded as either a deity (Goddess Lilith) or a demon (a Succubus). Read on to understand the nuances of working with Lilith.

Lilith is known today as the original counterpart to Adam in the beginning of creation as told by the Judeo-Christian tradition. She was his first wife, before Eve, and lived by his side.

It is said that Lilith was made from the dust of earth like Adam, which is why she believed that both should be treated the same. She did not want to be submissive, she exuded a very strong feminine power and demanded to be treated in the same way as her partner, even during sex.

Adam deemed her as his inferior and Lilith did not identify with that role. She chose to defy Adam and was forced to leave the Garden of Eden forever. Lilith is depicted as a demon, and had negative attributes associated with her by Jewish Lore.

The only mention of Lilith in the Bible is found in Isaiah 34:14 (Amplified Bible translation) :

“The creatures of the desert will encounter jackals. And the hairy goat will call to its kind; Indeed, Lilith (night demon) will settle there and find herself a place of rest.”

In the Jewish tradition, Lilith was a shape-shifter: a type of demon with the power to transform into a woman’s physical features, seduce her husband, and conceive a child.

In the Zohar (foundational book in the Kabbalah), Lilith is described as an evil temptress that uses men to birth demonic babies and spread evil throughout the land. Because Lilith chose her own authority over Adam’s, she is seen as the first feminist. There are countless references on the subject and feminist organizations that take up her name.

The exact origins of Lilith are uncertain and there is lot of speculation around the historical accuracy of most versions of her myth.

In Mesopotamian mythology, Lilith was associated with the figure of a female night demon. In this culture, the shadowy creature symbolized the wind and, therefore, had its image related to pests, malaise and death. To get in touch with her universe, Lilith used water as a portal. Already in Hebrew mythology, with quotes in the Midrash and Talmud, Lilith is also seen as a demon.

Among the Sumerians, in the middle of 3000 BC. C., Lilith was known by the name of Lilitu. In that period, her figure appeared, at first, in the representation of a group of demons or spirits related to storms and winds. According to some mythologists, in 700 BC the name was changed to Lilith. As in Sumer, the peoples of Babylon associated Lilith with evil spirits and demonic entities. Symbolizing her by the moon, the Babylonians believed that the female devil varied between bad and good phases.

In contemporary times, there is another interpretation of the image of Lilith, who is no longer just an evil female demon, instead being a symbol of sensuality and seduction. This change occurred among European romantic intellectuals, who paid tribute to Lilith in works such as the 1892 painting by John Collier, where she is portrayed as a sensual woman surrounded by a snake.

No. In modern-day practice, Lilith is a symbol of empowerment and resistance like many other Goddesses.

Lilith has a strong connection with the history and persecution of witches. Both were seen as diabolical beings by the terrified medieval men who saw in everything the presence of an absolute principle of evil, especially when they could not dominate what was opposed to their usual place of security.

Other than Lilith’s association with being a demon, she was also seen as a vampire because she was historically claimed to drink the blood of infants and children, mostly due to her rebellion against Adam. In that interpretation, Lilith is the mother of the Succubi, who are demons, eaters of men who attack women in labor and newborns.

According to that worldview, all women were dangerous and, in some way, Lilith resided in all of them. Today, we understand that witches as portrayed by media and by the Inquisition were never real, and many people have come to seek the guidance of Lilith to raise a figure of resistance to patriarchal society and oppression.

Depictions of Lilith in medieval and Gothic art tend to paint her with reddish hair, in the nude, winged, with a tattooed body and sometimes in front of a mirror without a reflection.

Serpent: As serpents shed their skin, they are symbols of rebirth transformation, immortality and healing. Lilith served as an important trailblazer and rebel, so is too a powerful archetype of transformation. The biblical meaning of the serpent/snake also shows the cunning side of Lilith, with the power to deceive and destroy.

Lilith’s Glyph: In astrology, the name “Black Moon Lilith” is given to a location on the birth chart that represents the the point along the moon’s orbit when it’s farthest from Earth. It is represented by a glyph of a crescent and a cross, for mind and matter. Lilith in astrology represents the dark side of one’s personality, sometimes linked to shadow work.

Dark Moon: The energy of the dark moon is rebellious, creative, and empowering—all things one could associate with Lilith. The symbol of the dark moon can be used in working with Lilith. Wearing this image on jewelry, or having the image around your altar space is a powerful way to connect you to her energy.

Owl: In Hebrew-language texts, the term lilith or lilit (translated as “night creatures”, “night monster”, “night hag”, or “screech owl”) first occurs in a list of animals in Isaiah 34. Since then she has been associated with different birds (eagles, and other birds of prey) but mainly the night owl.

There are various sigils that represent Lilith, including the Grand Seal of Lilith which is a combination of various Lilith sigils:

Learn how to make a sigil in this article.

Epithets and Names of Lilith

Lilith has had many names throughout history, some with known origins and some without. A few popular titles are:

According to the book Folk-lore of the Holy Land, these are the names of Lilith:

How to Worship Lilith

In her archetype of a Goddess, Lilith embodies the sexual energy of the Divine Feminine, opposed in polarity to the phallocentric masculine force. Wiccans and other practitioners typically aim to work in balance and harmony between these two opposites. If you feel that Lilith is calling you, reach out to her in your personal spiritual practice.

1. Research and study her: Make sure to become well-informed on Lilith and do away with anything that demonizes her, valuing her true worth as is her counterpart Lucifer, deity of knowledge and wisdom.

2. Set intentions: Lilith is a powerful and magnificent spirit and you must reach to her with clear intentions. Be honest and truthful at all times about your goals. 🌑 The lunar time of the New Moon or “dark moon” can be very beneficial in working with her.

3. Set up an altar for Lilith: Creating an altar specifically dedicated to Lilith is a great way to show your commitment to her. Make sure it’s her own individual altar. You can draw Lilith’s sigil on a piece of paper or onto a handmade craft to place on her altar.

Lilith has strongly been associated with sex, and Sex Magic is a powerful way to work with her. There are many ways to use sexual energy in your workings.

Correspondences and Offerings to Lilith

Some may choose to use blood as an offering for Lilith, but blood is a powerful connection to your own energy. You should only use blood in a ritual if you have a complete understanding of the energetic implications of doing so. This is not recommended for those who are just beginning to work with any deity.

Working with Lilith on a New Moon is a powerful way to tap into her energy. During this time you may wish to cleanse yourself with a New Moon Ritual Bath. Follow these tips to craft a ritual for Lilith:

1. Turn on some music that could be associated with Lilith’s nature. Express yourself through movement or dance. Dancing is a powerful way to raise energy that can allow you to connect with Lilith. Optionally, cast a circle to open your ritual.

2. Pour red wine as an offering in a chalice. Set the chalice on your altar that also holds the sigil, candles and offerings to Lilith.

3. Say one of the following incantations to invite her into your and drink the red wine. After doing so, move to a comfortable area where you can focus, open up and receive her energy.

You can use your sexual energy to bring her energy into you as well. Lilith is very fond of sexual energy. While performing self pleasure, recite an incantation and offer your sexual climax to her. Once completed you may feel her presence.

“Oh Lilith, Dark Goddess, hear my call.
From the dawn of creation you have liberated yourself from your shackles to arise in your magnificent sexuality. Lilith I invoke you. Tonight I dedicate my sex to you. Cum with me! I will feel your primal energy, so deep and penetrating reverberating throughout my being.
Touch me Lilith, touch me how I need to be touched, kiss me as I need to be kissed. Make my body quiver in your divine presence. You know what I need so very well for you need it too. Take my mind and body to the realm of transcendent passion. I beg you to carry me to the limits of ecstasy and unbridled lust. Do this with me, Lilith and I will dedicate every instant of ecstatic joy from my orgasm to you and you will drink of me and become drunk with lust. Hear me Lilith, hear me!”

“Lilith
I invoke you, I adore you, I desire you
Lilith
Goddess of darkness, Illuminate my temple in black light
Lilith
Kindle in me the excitement of the flesh under the domain of the mind
Lilith
Great Mother, sister, lover, give me the cup of knowledge.
Lilith
I am drunk from your breasts, I take hold of your majesty
Lilith
Timeless abyss, you destroy my fears revealing the secret knowledge
Lilith
Unleash your legions against my enemies
Lilith
Consume me in your embrace, in the swirling starry Horizon.”

It’s important to not let the misconceptions of Lilith pollute her true power and the benefit of working with her. Lilith can bring authenticity, authority, empowerment, and self acceptance into your life. She is a powerful, ancient, goddess, and only those who are prepared and informed should work with her. Once you are ready, working with Lilith will most certainly transform your life and help bring out the magic of the darkness within you.