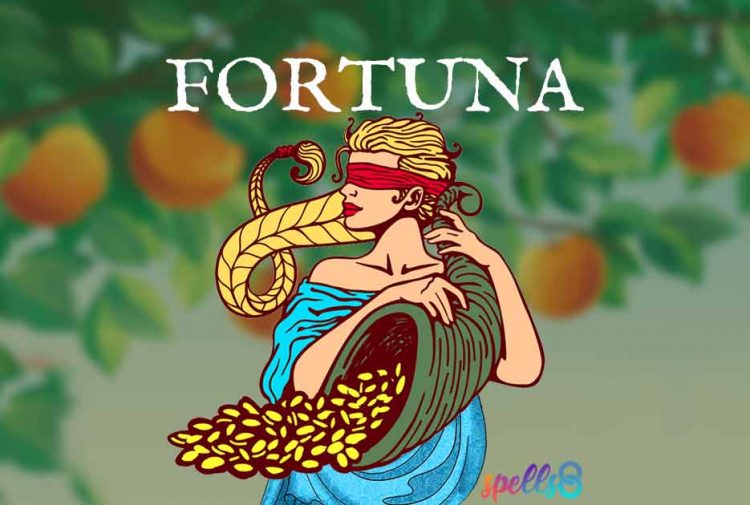 The Goddess’ Temple: Myths & Symbols of the Divine Feminine in History How To Worship Goddess Fortuna

There is a divine goddess that brings luck and blessings and is followed by many people in various parts of the globe. The goddess is known as Fortuna (Latin) or Tyche (Greek). In this post, we will take a look at how to worship the goddess Fortuna, as well as some of the symbols and correspondences associated with her.

Fortuna is the Roman goddess of luck, associated with all fortunate events in the lives of mortals and gods, such as fertility, motherhood, prosperity. However, she also causes unfortunate events, blindly distributing her gifts not to those who really deserve them, but mainly by chance.

Because goddess Fortuna personifies said chance, she will likely favor those who worship Fortuna through the extension of her cult. In Roman times, her adoration was done under multiple invocations and she was invoked both in public and private acts.

Are Fortuna and Tyche the same? In Roman mythology, Fortuna was the goddess of fortune and the personification of luck. She was the Roman counterpart to the Greek goddess Tyche. However, Roman Fortuna appears to be rather associated with chance while Greek Tyche is more clearly associated with fate, or destiny.

Fortuna was initially regarded as a farming goddess who brought fertility to the soil and helps farmers achieve a bountiful harvest.

Many ancient farmers worshiped Fortuna because they saw her like the goddess that brings increase, prosperity, and high productivity. These people also believed that Fortuna was responsible for making women fertile. Many women who had difficulties bearing children looked up to and called on Fortuna in worship.

Gambling was common among the ancient Romans, so the goddess was worshiped by gamblers because they believed she had the powers to bring them luck and make them win more. Her name and aura were a mainstay in ancient Roman cultures as lots of people trusted her for divine guidance and direction in their life journey.

What is the symbol of the goddess Fortuna? Fortuna’s major symbols include the wheel of fortune, a ship’s rudder, ears of wheat, a rotating globe, and the cornucopia or horn of plenty.

The Wheel of Fortune

Goddess Fortuna is believed to wield the power to alter luck and fortune as she wills. One of the tools in her possession is known as the wheel of fortune. She spins it to bless whoever she pleases. The wheel is so special because when goddess Fortuna spun it no one could predict or forecast where the pointer would fall. There was always that element of uncertainty, which indicates that luck or fortune could be either good or bad and could fall on anyone.

This wheel dates back thousands of years and it has inspired one of the Major Arcana cards in the Tarot: The Wheel of Fortune.

Another symbol of goddess Fortuna is a ship’s wheel or rudder. It is widely believed that Fortuna is responsible for governing the affairs of our life and steering our destinies to safe harbor. She is believed to provide guidance and help us make crucial and life-changing decisions in our lives.

Ears of wheat are also symbols of goddess Fortuna and they represent wealth and prosperity as well as good health. Many goddesses throughout history have been symbolized with the ear of wheat, including Demeter, Arianrhod and Cerridwen.

One of the symbols of the goddess Fortuna is a rotating globe which represents her unpredictable nature. This rotating globe shows that luck can go either way and pitch its tent at anyone’s doorstep. It’s also an indication that life is not always a bed of roses and things can change quickly from good to bad and vice versa.

The cornucopia is not just synonymous with thanksgiving and Mabon. It is also a symbol of goddess Fortuna and it represents infinite supply, abundance, and value. It is also widely referred to as the horn of plenty by the ancient Romans.

Wreaths represent victory and are usually presented to athletes or people who have excelled in their chosen field of endeavor. The ancient Romans made wreaths out of olive branches and laurel leaves.

Epithets and Names of Fortuna

Fortuna had many names throughout history as her cult was widespread. A few popular of her titles are:

How to Worship Fortuna

Just like most deities, it is possible to establish a connection with the goddess Fortuna in prayer and worship. One thing you need to understand before trying to perform any act of worship is that worship is more spiritual than physical. While people sometimes worry about what offerings to give and how to set up an altar, you would connect with Fortuna better if you meditate on her and focus on her divine presence.

One way you can connect to Fortuna in worship is to mount a green candle on a coin, light the candle and start meditating. While you meditate let the entire wax of the candle drip all over the coin. You can also call her name and acknowledge her presence and ask her for your heart desires. When you are through with the whole process, pick up the coin with the wax on it and carefully put it in your purse, never discard it.

One of the ways of appeasing and finding favor with many gods and goddesses is by giving offerings to them, and Fortuna is no exception. Set up an altar and include offerings to Fortuna such as a Cornucopia, rosemary, berries, coins, and flowers. Get more ideas on a prosperity altar here.

You can also offer incense to goddess Fortuna. Some of the common incense offerings to Fortuna are Vanilla, Aloe Vera, Nutmeg, Cinnamon, and Frankincense.