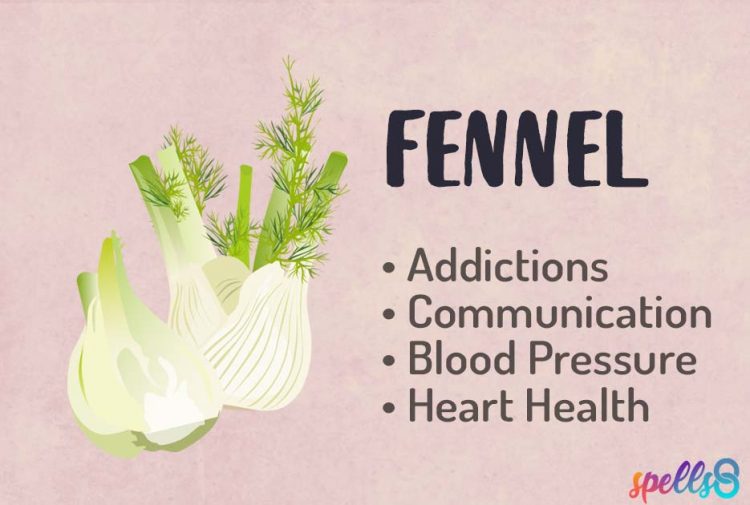 Fennel is a plant that can reach up to 6 feet in height, with long, very thin, green leaves that end in the shape of a needle. Its flowers are yellow and you can use every part of it: root (bulb), leaves, flowers and seeds.

Fennel is a good luck herb that can protect from evil spirits. It was in the Middle Ages when these magical properties began to be attributed to this herb, since people considered it capable of undoing spells by hanging it on the door of their houses, especially around the Summer Solstice or Litha.

It is believed that the Romans used fennel in the form of infusions to improve their heart health, nervous system, as an anti-inflammatory, pain reliever and to eliminate viruses or bacteria.

Teas or infusions with fennel leaves or seeds have many advantages and benefits. It can help relieve indigestion, stomach pain, kidney pain, and discomfort when urinating.

It was allegedly used by witches to ward off demons, evil spirits and other entities. They would put fennel branches into fires or bonfires in sacred places so that no evil would come near.

Fennel can help the smooth muscles of the gastrointestinal system relax and reduce gas, bloating, and stomach cramps.

Origin: Native to Europe, from the Mediterranean region, although it was later brought to America and the rest of the world.

A popular culinary herb, this celery-like winter vegetable has spread from the Mediterranean all across the world. The popularity of fennel (Foeniculum vulgare) comes from its ability to use every single part of the plant for medicinal and culinary uses. The pale bulb and green stalk can be used as well as the leaves and seeds. Did you know that every part of a fennel plant can be eaten?!

The ancient Romans spread fennel throughout the lands during their conquests. The ancient followers of Dionysus would carry ceremonial wands called thyrsus made out of giant fennel (Ferula communis) stalks. Romans brought fennel to England where the monks grew it in their gardens to be used in liquors. The interesting licorice-like flavor lent itself nicely with their spirits and so it found a permanent spot in monastic gardens.

But it wasn’t just popular in the West, Chinese and Ayurvedic medicine used fennel for hundreds of years. And it remained popular as the Puritans brought fennel with them to the new world. In fact, the Puritans called fennel seeds, “meetin’ seeds” as they chewed them to stave off hunger during extremely long sermons.

Fennel hung in doorways or windows will protect the practitioner from any form of evil or sorcery either from malicious spirits or meddling humans. It is most known for protecting against the spirits of the dead. Grow it outside of the home for protection from negativity and any exterior energetic harm. It can also protect the space from harmful spells that might be cast against the practitioner.

Fennel can be used in any spell that focuses on getting rid of vices. These include but are not limited to overcoming addictions, breaking bad habits, or gaining strength for self-improvement. Historically fennel was used to ease hunger pains for those who were fasting, thus it is an excellent addition to any spell pertaining to combating cravings.

As an element of Air, fennel is linked to communication, divination, and intelligence. Chewing fennel before an important meeting or speech can provide confidence and eloquence in a speech. The scent of fennel aids in strengthening the memory and focusing the mind. That’s why stroke victims have traditionally been given fennel tea.

Heart health is supported through the fiber, potassium, folate, vitamin C, vitamin B-6, and phytonutrient content in fennel. Fiber significantly reduces the risk of heart disease by reducing the total amount of cholesterol in the blood. And potassium has also been known to promote heart health. On top of that, Vitamin B-6 and folate both prevent homocysteine from building up and damaging blood vessels that lead to heart conditions.

Because of the high potassium content, people with kidney disease should limit their intake of fennel. Those taking beta-blockers should avoid fennel due to the elevated potassium levels.