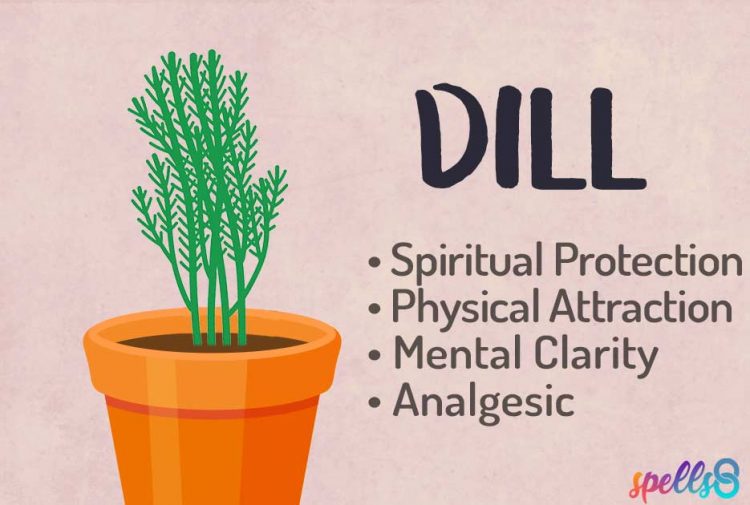 Dill is used for pickling, as well as seasoning fish and other fine dishes, due to its unique smell and taste. The leaves have a distinctive green color and are adorned with yellow flowers and small fruits. Dill has many medicinal properties but it is best known for reducing dyspepsia and gas, hence its name meaning soothing herb.

Dill (Anethum graveolens) is a visually attractive plant, with a thin long stem branched at the tip. It is an easy plant to cultivate since it grows easily in diverse climates.

Uses of Dill in Witchcraft

Dill has been used since ancient times as a plant that possesses the power of healing. The first known records of this herb in the medicinal field date back to the time of ancient Egypt, in fact, it is mentioned as a plant with the ability to relieve pain in the Ebers Papyrus, a text written approximately in the year 1500 BCE and one of the oldest known medical treatises.

During the Middle Ages, dill was used as a protection agent against evil, in love potions, or as an aphrodisiac. Its seeds are also used in the preparation of therapeutic infusions.

Use it in your Kitchen Magic: The leaves and fruits can be used as a condiment while cooking, to season various dishes, such as meat or fish.

An infusion prepared with dill leaves has good effects on the digestive system. It helps against indigestion caused by stress, cramps and annoying gases. It also relieves constipation because its bactericidal action favors the intestinal flora.

Generally, it is drunk in healing infusions, either alone or accompanied with other spices or herbs. For example, for gastrointestinal problems, it is advisable to drink an infusion made with 2 teaspoons of dill seeds and 1 cup of hot water.

Dill is an aromatic herb that provides antioxidants, calcium, manganese, and iron. As a culinary spice, it gives anti-inflammatory and antiviral properties to the food that it is used to season.

Ancient Egyptians knew dill as “the soothing herb,” and that is what its name means. For centuries, it has been traditionally used to calm upset stomachs and soothe babies with colic. The herb is most commonly known as a pickling spice today, but it has plenty of other culinary uses. In Ancient Greece, people sometimes used dill oils to flavor their wines.

Dill’s strongest magickal property is its ability to protect from ill intents. During medieval times, Europeans used it in potions and incense blends to undo harmful spells. Ancient Greeks burned dill scented oil in their homes, although this may have had a practical as well as spiritual purpose. Dill is excellent for warding off pesky insects. In the garden, it repels spider mites, squash bugs, and aphids.

Protects against Visitors with Negative Intentions

Hang a sprig of dill over your front door frame to prevent anyone with ill will from entering your home.

Hang an aromatic sachet of dill over your bed or lay it under your pillow to keep from having bad dreams. This will also help you sleep more soundly.

Dust your wallet, purse, or pockets with dried dill to attract wealth. You can also carry dill seeds in your pockets, wallet, or purse for the same result.

Add dill fragrance to your incense blend and burn it while meditating or communing with your Spirit Guides prior to making a big decision.

Serve soup, juice, or wine flavored with dill to your intended, and their eyes will be opened to your natural beauty and charms.

Dill has analgesic properties. When taken as a dietary supplement, dill can reduce the discomfort of painful periods.

As an antidepressant, dill capsules have yielded comparable results to two leading antidepressant drugs, sertraline and tramadol, with no adverse side effects.

When treated with either dill tablets or dill extract, research subjects showed dramatic improvements both in blood glucose and in liver enzymes that fight harmful cholesterol.

Dill can sometimes cause skin irritation. Drinking large quantities of fresh juice made from dill can cause the skin to become extra sensitive to the sun, increasing the risk of sunburn and skin cancer.

Avoid using this herb if you are allergic to carrots, as it is a member of the carrot family.