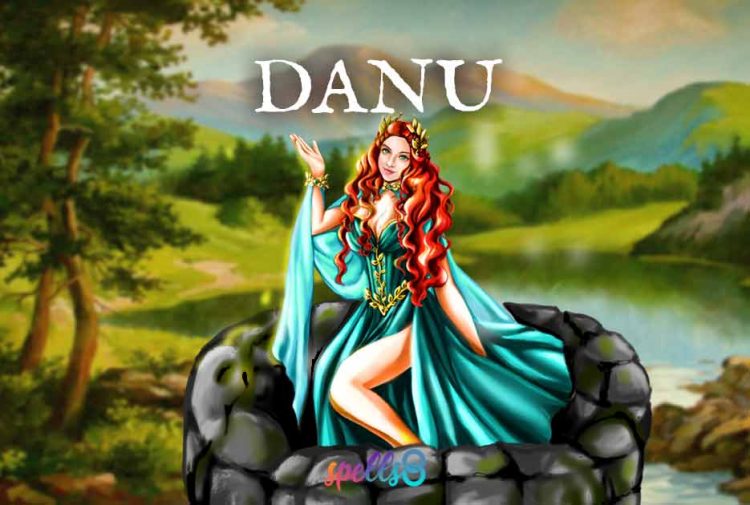 Deep in Irish mythology lies the covert ancient Goddess Danu. Believed to be one of the oldest Celtic deities, she is the Goddess of the earth and the moon, fertility, wisdom, wealth, abundance, wind, and water.

She is also seen as the Mother Goddess, having birthed all things and being the Divine Mother to the Gods. Goddess Danu is a Triple Goddess because practitioners have visualized her as a maiden, mother, and hag.

Though there is little information about the mythology of the Mother Goddess, studies claimed that she was married to Bilé, the World Tree and the God of the dead. Bilé came to the Emerald Isle, where Goddess Danu resided. The two met when leaders pleaded to Goddess Danu for assistance with their dead. The people came to Mother Danu in desperation because their dead had no way of crossing the veil, and Danu sought help from Bilé. It is through this story that Goddess Danu turned him into a representation of a tree. He only agreed to this if he could return from the Underworld to Goddess Danu and commune with her once a year.

People in Celtic studies claim that through Goddess Danu and Bilé came Dagda, the Father of All. Dagda was a mighty God who became the leader of the Tuatha Dé Danann, the Irish Gods, or the “Children of Goddess Danu,” also known as “the faery people.” Goddess Danu was known as the Divine Mother of these people.

The Tuatha Dé Danann were said to have been a tribe of people exiled from Ireland for reasons unknown. The exile caused them to weaken in strength and numbers. References mention that Danu offered her support to the people, allowing them to return to Ireland in a “mystical mist.” With the Goddess’s help, the Tuatha Dé Danann were nurtured back to health and have since become a well-known Irish legend. Danu would gift the noblest people of the tribe with newfound talents and skills and increase their power. Aside from the speculated marriage to Bilé, the birthing of Dagda, and the Tuatha Dé Danann claiming heritage from Goddess Danu, there is little else known about her mythology.

Symbols of Goddess Danu include fish, horses, seagulls, earth, wind, amber, keys, crowns, wells, and flowing water. Since she had an affinity with the Tuatha Dé Danann, river stones with natural holes are a fantastic way to bond with her. Moreover, natural stones like these are the way to the Fae (faeries).

As the Goddess of water, it only makes sense that water would be in your practice when worshipping her. Practicing with this element could be as simple as pouring water into a bowl. Magic only becomes complicated when you overthink it.

As a Divine Mother to all Gods and Goddesses, Goddess Danu connects with all things. For this reason, there shouldn’t be too much focus on the symbols with which she is primarily associated. Likewise, working with the Mother Goddess shouldn’t be different from any other magic you practice. A crucial thing to remember is that there is no right or wrong way to do something. If it makes sense to you, then do that.

Titles and Epithets of Danu

There are many different translations and epithets associated with her name. Many speculate that Danu means “the flowing one” or “to flow.” These derivatives come from the Indo-European languages. In the Scythian language, Danu means “river.” Both languages have a plausible correspondence given the common consensus surrounding the information of Mother Danu.

Many connections appear with Danu and other Goddesses in Celtic studies. Some scholars believe that Danu is a title instead of a name, which would explain the immense similarities between Goddess Danu and Goddess Anu, Goddess of the earth, rivers, and sea. While Goddess Danu is said to have birthed all living things, Anu is said to be Mother of the Universe. Many people within the Celtic community see Danu and Anu as one and the same.

Scholars say that the Danube River and many others represent Goddess Danu. There are also the Paps of Anu strongly connected to Goddess Danu. They are a pair of mountains shaped as a woman’s breasts located in Kerry in the Republic of Ireland; this connection is more evidence of Goddess Danu and Anu’s sameness. Goddess Danu is also frequently associated with the Morrígan, a Celtic Goddess of war, death, sovereignty, and rebirth.

How to Worship Danu

While there is no singular way to worship the God(s)/Goddess(es) you choose, some things can bring you closer to a specific deity. Along with the symbols already discussed, you can worship through meditation, prayer, the dedication of an altar, and much more. An essential aspect is to have respect and thank them for all your blessings.

An example of worshipping the Mother Goddess can help determine where to begin. The first step is to cleanse. It would be best to cleanse yourself, the space in which you will be practicing, and any tools you may use. If you have an altar dedicated to Goddess Danu, purify that too. Purification is one of the most important steps, so don’t forget it.

Since Goddess Danu is strongly associated with water, it makes sense to use it as an offering during rituals. After cleansing, pour some water into a bowl at the beginning of your devotion. If you’re practicing outside, pour it onto the ground. Then, you will call out to the Mother Goddess, for example, “Lady Danu, I invite you into this space with me.” Call her and invite her in however you are comfortable. Once you have done this, you must close your eyes and wait.

Wait until you sense her presence, see her in your mind, hear her, etc. There is no right way to experience a deity’s presence. You’ll know when you feel it; once you do, prove your gratitude towards her. If you’ve been called upon to make a unique offering to Goddess Danu, you should do so during this time. Do not ever promise something that you will not do. False promises will anger the gods.

When Goddess Danu is in your presence, or any God/Goddess, for that matter, listen and experience. It isn’t appropriate for interpretation during this time, only focusing on the present. Once the devotion finishes, pour another offering, drink some for yourself, and spill the rest outside. You should journal what you encountered and use the time afterward to understand what she may have communicated to you.

There is a strong connection between Goddess Danu and water. After all, she is the Mother of All Beings, and water brings life. Some occult practices that involve water are scrying for divination, spells, spell jars, and purification.

Goddess Danu is the Goddess of fertility. You can use her assistance in magic with all things reproductive and womanly. An example of this could be a spell to help you connect more with your feminine side or even use divination to see if you could fall pregnant. There are numerous ways you can practice with the Mother Goddess including casting runes. Remember where her most potent powers lie and call upon her when you require assistance.

Remember, there is no rule book to practice magic or worship a deity. Now that you’ve learned the story behind Goddess Danu, what she stands for, and how influential such an ancient Goddess can be, you are ready to decide if she is the One calling to you. Now is the time for meditation and being present so that you can hear any messages and listen to your intuition.