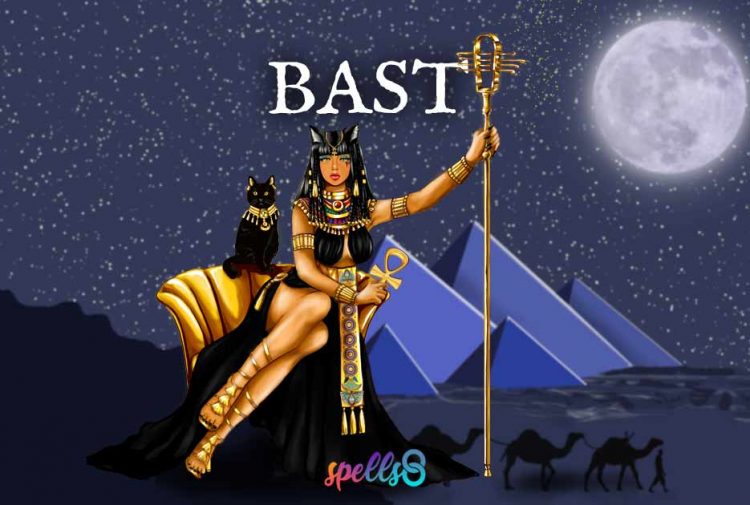 Bast is best known as the feline Goddess of ancient Egypt, also called Bastet. Worshiped throughout Upper and Lower Egypt, the exact period is unknown but some believe it was around the time of the second or Han dynasty. Her cult was centered around the city of Bubastis.

Originally a lioness goddess, Bast is usually depicted as a cat or a feline-headed woman. Bast was seen as the protector of the home, domesticity, and women’s secrets. She was also known as a goddess of pleasure and dance, music, and song. After her rise in popularity, Bast became associated with Isis and eventually came to be seen as the daughter of Ra. Though her worship has diminished over time, she remains an important deity in the Egyptian pantheon.

Bast was known by different names such as the Lady of the East and Goddess of the Rising Sun. She was the daughter of Ra and the All-Seeing Eye, the eye of the moon and the eye of Ra, the sun god.

It was said that she rode through the skies with Ra by day watching over the Two Lands. Also known as the Goddess of the moon, at night, she transformed into a cat and would protect Ra from his enemy. The Goddess had many names and associated deities, including Bastet, Sekhmet, Mut, and Hathor.

Bast was usually seen as a woman with a cat’s head or a lioness. The cat was a sacred animal in Ancient Egypt and was often associated with royalty and gods. The Goddess represented fertility and motherhood but could also be fierce with protection when necessary. She was a famous goddess, and temples were built in her honor throughout Egypt.

Though her cult was centered around Bubastis in the Nile river delta, she also had an important cult at Egypt’s capital, Memphis, making her one of the most popular goddesses in ancient Egypt. She was originally known as Bast, meaning “soul of Asset,” but later came to be called Bastet after the ointment jar hieroglyph 𓎯 was introduced. Some experts say that translated into English, the hieroglyph for Bastet also means “She of the ointment jar.”

She also served as a divine nursemaid and mother figure to the Pharaoh and was worshiped as a goddess of war and vengeance. She was revered as a protector of the home and family, and her temples were often filled with cats which were considered to be sacred. Offerings made to Bast included milk, cream, honey, and mice, which were thought to please her feline form.

She was represented in the form of a domestic cat, or as a woman with a cat’s head, who always carries an ankh (Egyptian cross of life) or in other cases a sistrum (musical instrument) because she especially liked that the humans will dance and play music in his honor.

The domestication of cats first occurred in Egypt about 4,000 years ago, in conjunction with the religious cult of Bast/Bastet. The Egyptians buried mummified cats with the dead symbolizing the protection and favor of the Great Goddess Isis and of Bast, protector of the house. They regarded the cat as a symbol of the moon because of its nocturnal habits and because of its eyes contracting and expanding like a full and crescent moon.

The symbol of eternal life in ancient Egypt, as well as the word for physical life, it represents eternity when positioned in the hand of a deity. The ankh was used in rituals, especially in those involving the royal cults, and it had special significance when used in various temple ceremonies.

The word sistrum comes from the Greek term for “shaken,” and indeed, this instrument was used to produce a rattling sound by shaking it back and forth. It was typically made of bronze or brass and featured a series of loops or crossbars that rattled against each other when shaken. The sound of the sistrum had the power to fend off evil spirits. This sound was thought to mimic the sound of papyrus reeds rustling in the breeze, and this made it particularly suitable for use in rites involving the Nile River.

One recent suggestion by Stephen Quirke (Ancient Egyptian Religion) explains the name Bast as meaning “She of the ointment jar”. This ties in with the observation that her name was written with the hieroglyph “oinment jar” 𓎯 (bȝs) and that she was associated with protective ointments, among other things.

Titles and Epithets of Bast

The Egyptians had a variety of epithets and titles for Bast, including:

Since Bast was venerated as the protector of families and homes, many would call on the deity when they felt their home was in need of protection. She was also associated with fertility and motherhood, and many women who were pregnant or trying to conceive would pray to her for assistance.

Offerings and sacrifices were often made to her, and hymns and prayers were written in her honor. The Egyptians believed that Bast could bring happiness and joy and that she would always protect those who honored her.

Visit the Witch’s DIY Apothecary to print out recipes and prepare your own herbal blends, with step-by-step instructions and photos.

The Antiseptic Ointment and the Goddess Anointing Oil are wonderful recipes to honor Goddess Bast in protection rituals.

Signs Bastet is calling you: How do you know if Bast is trying to connect with you? Those who see signs of the Goddess or feel a connection to Bast might find themselves being followed by cats, seeing lots of cats, or seeing images of cats in their everyday lives. Bast was typically depicted in the form of a cat and her temple at Bubastis was known for its large number of cats.

Bast was associated with a number of different gemstones. Black tourmaline is a protective stone that can help to dissolve negative energy, making it an ideal stone for those who worshiped Bast. Tiger’s eye is said to represent courage and good luck, while the cat’s eye is associated with stability and focus. In addition, many animals were associated with Bast, including the panther (wisdom), jaguar (war), and lion (respect).

You can use any of these gemstones when preparing an altar in Bast’s honor, as well as red, yellow, or orange candles, statues or images of cats, an ankh, or the Eye of Ra. Don’t forget to raise energy any type of music, dance, or celebration. These will all help you connect with the Goddess’s energy.

This PDF version comes with a transparent background so you can print it on any kind of paper you want and add it to your own Book of Shadows.

Many offerings were made to Egyptian Goddess Bast, including food, wine, and jewelry. Statues and amulets were also made in her likeness and worn to invoke her for protection. The ancient Egyptians believed that she would watch over them and keep them safe from harm.

Some practitioners use a black cat candle, which is a candle shaped like a black cat. Its purpose is to bring good luck or to entreat the assistance of the Egyptian goddess Bast (Bastet) for protection of oneself, property, and pets.

Visualize Bast in all her glory. Feel her love and protection fill your heart. Visualize her eyes opening and watching over you. Say one of these prayers to invite the Goddess in your ritual:

Prayer to Bast for Protection

“Beloved Bast, mistress of happiness and bounty, twin of the Sun God, slay the evil that afflicts our minds as you slew the serpent Apep. With your graceful stealth anticipate the moves of all who perpetrate cruelties and stay their hands against the children of light. Grant us the joy of song and dance, and ever watch over us in the lonely places in which we must walk.”

“Flame alight through day and night,
Your watchful eyes to see.
Em Hotep! Bast, your eyes so bright,
I humbly summon thee.

By your eyes aglow, Great Bast!
Protect and bestow your blessings to last
Upon the loved one who holds his stone.
Your love and protection be it shone!””

Today many people still feel a connection to Bast and seek her guidance in their lives. Some do so because they identify with her role as a mother or caretaker. Others view her as a protector, both of their homes and their families. And still, others are drawn to her magical powers and the mystery of the universe that she represents. Whether you are seeking comfort, strength, or wisdom, connecting with Bast can be a rewarding experience.