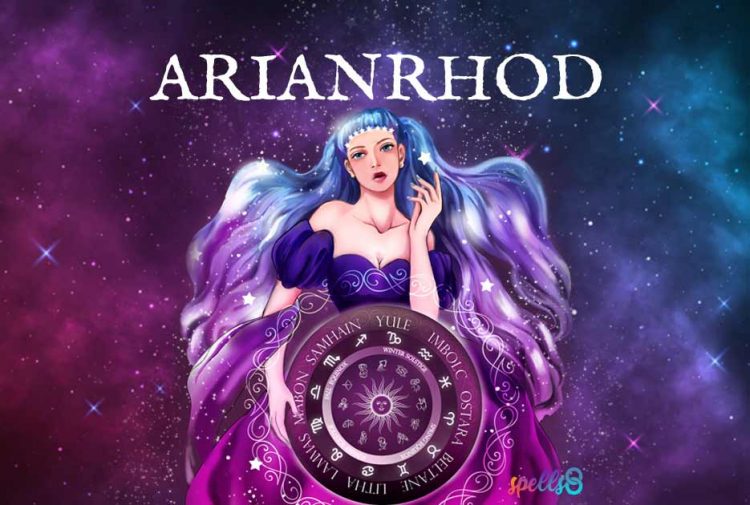 Arianrhod (sometimes spelled Arianrod) is a Welsh figure of fertility. In Welsh mythology, she plays a part in the Mabinogion, the earliest prose stories of British literature.

While some say Arianrhod is a goddess, the stories in the Mabinogion imply that she is somewhat of a sorceress but not a goddess. It is believed that Arianrhod’s story is inspired by an earlier Moon goddess. As they say, stories grow out of other stories.

As a note, many goddess stories often evolved into stories about sorceresses, witches, and other women of magical means which is most noticeable in more stratified, patriarchal societies. The book Goddesses in World Mythology states that she was originally a goddess, ‘later relegated to the status of a sorcerer’.

The best way to connect with any goddess or god is through their mythology, epithets and symbols. Here’s a summary of the most important tales featuring the goddess Arianrhod, and how to worship Her in your personal pagan practice.

The Mabinogion contains four branches and Arianrhod plays her most prominent part in the fourth branch, Math fab Mathonwy (Math, son of Mathonwy). She enters the story when King Math of Gwyendd is tricked.

According to the tales, King Math was required to rest his feet in the lap of a virgin unless he was at war. If he failed to do so, he was cursed to die. Through a sequence of trickery and rape on the part of Math’s nephew, Gilvaethwy, King Math lost his virgin foot-holder and was in need of another. The magician Gwydion suggested that Arianrhod could take the place of the last virgin foot-holder.

King Math, understanding that he would suffer death if he couldn’t procure a virgin foot-holder, asked Arianrhod about her virginity. Arianrhod directly stated that she was a maiden. To verify this, Math produced his magic wand. He requested for Arianrhod to step over the magic wand to prove her virginity. However, she does so and fails. Immediately after she stepped over the wand, two things happened. First, a chubby boy appeared and began crying. Second, a shapeless form appeared, and the court magician Gwydion covered it with a scarf to keep it hidden. At the sounds of the chubby boy’s wailing, Arianrhod fled from Caer Dathyl (King Math’s fortress).

Math granted the crying boy the name of Dylan. When Dylan was baptized in the sea, he became as the sea and swam just like a fish. Because of this, Dylan became known as the son of the wave. Eventually he suffered death at the hands of his uncle, but our story follows the unshaped form of flesh that appeared instead.

The court magician, Gwydion, took the bundle of flesh that Arianrhod had dropped. After having covered it with his scarf, he hid the shapeless thing into a container before anyone else had a chance to notice what had transpired. The flesh turned out to be yet another child, though it remained unnamed. Gwydion (the magician) took the nameless boy to be nursed, and the child grew far faster than any normal boy.

Gwydion developed a strong bond with the unnamed child. After four years, he determined it was time to learn the child’s name. He gathered the child and they ventured forth to Caer Arianrhod to see the lady herself. Even though the unnamed boy was only four years old, he was as big as an eight-year-old child.

“Who is that boy?” Arianrhod asked Gwydion, after he arrived at her camp. Unease crept over her at the sight of the preternaturally large child. “Who is this child that follows you?”

“None other than your very son, Lady Arianrhod,” the magician answered. “He sprang forth from your body as you left the good king’s castle. Using my scarf, I covered him and kept him safe from prying eyes.”

A heated exchange followed, with Gwydion demanding to know the boy’s name.

“None,” Arianrhod spat. “And never shall he have one unless he receives one from my lips.”

With these words, Arianrhod laid a tynged on the unnamed child. A tynged is the Welsh equivalent of a curse. It cannot be undone except by Arianrhod’s own will. Tynged can translate to doom or fate, and it would seem that the unnamed boy’s fate was to remain forever unnamed. Names possess great power, and a magician such as Gwydion surely understood the dire situation that the unnamed boy found himself in.

Enraged, Gwydion swore before the powers of the universe that Arianrhod was a wicked woman. He took the unnamed boy and retreated to Math’s castle of Caer Dathyl. Gwydion secluded himself in his study, planning his next move. The boy would have a name, and Gwydion would use any trick he could think of to grant the child one. The candle in Gwydion’s mind burned until he came up with a solution to Arianrhod’s tynged.

One day, Gwydion disguised both himself and Arianrhod’s unnamed son as shoemakers. Gwydion made a boat out of seaweed and sedge, then set sail for the port of Arianrhod’s castle. Upon their arrival, Gwydion and the unnamed child began to craft the most beautiful leather shoes. So fine was this footwear that it drew the attention of Arianrhod herself. Desiring a set of shoes, she had her feet measured and sent messengers to deliver the measurements to the shoemakers. Crafty Gwydion sabotaged the shoes every time a messenger was sent with the measurements. Arianrhod received shoes that were too large and shoes that were too small, though she still admired their splendid construction. Resolving to secure a pair of fine shoes, she ventured down to meet the shoemakers. As she visited Gwydion and the boy, the boy struck a wren with a single stone. It was a masterful shot, and Arianrhod remarked that the fair-haired one had a skillful hand.

Elated, Gwydion cast off the disguises and revealed that Arianrhod had unwittingly given her son a name: Lleu Llaw Gyffes: “The fair-haired one with the skillful hand”.

Furious, Arianrhod placed another tynged upon Lleu, stating that he’ll receive neither arms nor armor from any save Arianrhod herself. Gwydion took this tynged about as well as the last.

“Do whatever evil that you might, woman,” Gwydion said. “Lleu shall receive weapons and armor. You shall not stop us.”

Yet again Gwydion cooked up a scheme to thwart Arianrhod’s tynged. He raised Lleu until the boy was old enough to be in need of arms and armor. Seeing that it was time, Gwydion disguised both himself and Lleu as youths. They ventured yet again to Arianrhod’s castle. Arianrhod greeted them, and Gwydion entertained the hall with stories of heroes and legends. Much feasting took place, for Arianrhod was a generous hostess. With full bellies, those dwelling in Arianrhod’s castle eventually fell fast asleep.

Gwydion, never one to miss out on opportunity, conjured illusions of warships to fool the inhabitants of the castle into thinking they were being invaded. Arianrhod, desperate to defend her home, issued weapons and armor to her guests…including Lleu. Yet again, Gwydion cast off the disguises and taunted Arianrhod with his cleverness.

Never one to let a slight pass, Arianrhod laid yet another tynged upon Lleu: that he would never have a human wife.

And here, Arianrhod fades from her own myth. Gwydion and Lleu continue on their adventures and eventually make Lleu a bride made of flowers to thwart Arianrhod’s final tynged. Lleu himself gains great renown in the Welsh tales, becoming a great hero and leader of Gwynedd, in northwestern Wales.

Analysis of the Myth

Like many female figures and goddesses of myth, Arianrhod possesses great powers of fertility. Both of her children are born via seemingly supernatural means, although she becomes desperately at odds with the son that becomes known as Lleu Llaw Gyffes. Despite her obvious antagonism towards her son Lleu, she grants him life and her antagonism set the stage for Lleu’s ascension to greatness. She inadvertently grants him two boons: his name and his weapons.

The birth of her first son, Dylan, and his affinity for the sea gives her an association with large bodies of water. Like the sea, she can be fickle, and she requires someone of cleverness and knowledge to navigate her watery personality (in this case, the magician Gwydion).

Arianrhod is a complicated figure. While her treatment of Lleu is very much unlike that of a mother, she is also shown to be hospitable towards complete strangers, such as when she greets the disguised Gwydion and Lleu. Gwydion takes advantage of this hospitality to thwart the tynged she has laid upon Lleu. She is also quick with a compliment, such as when she remarks upon Lleu’s excellent throw.

This mix of friendlessness and fickleness makes her more than just a villain of the story; she’s often quite content to mind her own business until Gwydion cooks up another scheme to break a tynged. Still, her willingness to put a curse upon her unnamed child is curious, and her sense of shame greatly drives her motivations throughout the tale.

Titles and Epithets of Arianrhod

How to Worship Arianrhod as a Goddess

Take the archetype of Arianrhod, her correspondences and symbols, and reimagine the Goddess with your own vision. Arianrhod is a weaver of fate. Call Her into your ritual by dedicating a prayer, chanting a mantra, meditating, crafting a work of art, an altar, or a meal.

Whether you’re a woman, man or other, worshipping a goddess like Arianrhod can empower yourself and your spiritual practice. The Divine Feminine is expressed in many ways. Read the myths and legends of the goddess of ancient but keep in mind that many of these tales were originally developed by ancient (mostly patriarchal) societies and some of their ideas can be limting to your practice.

Arianrhod is a Welsh Moon Mother and virgin Goddess of fertility. In goddess belief, the word “virgin” means “not belonging to a man” and has nothing to do with sexual behavior. (Imel, Martha Ann, et al. Goddesses in World Mythology. 1993).

Role: Mistress of the otherworld tower of initiation, Caer Sidi, where poets learn starry wisdom and where the dead go between incarnations. Caer Arianrhod is the circumpolar stars, to which souls withdraw between incarnations; she is thus a Goddess (or figure) of reincarnation.

Animals: Fish (her son Dylon takes to the seas like a fish)

Genealogy: Daughter of the Mother-Goddess Dôn and sister of Gwydion. Mother of Dylan and Lleu Llaw Gyffes.

Approach Her with respect and transparency, as any honest seeker would do with any deity. The best way to connect with Arianrhod is through her mythology. You are encouraged to read her myth and invocation, write poetry or prose for Her, or make an offering on an altar dedicated to her.

O Arianrhod of the Silver Wheel,
By all the many names men give to thee-
We, all thy hidden children, humbly kneel
Thy truth to hear, thy countenance to see.
Here in the Circle, cast upon the Earth
Yet open to the stars – unseen, yet real-
Within our hearts give understanding birth,
Our wounds of loss and loneliness to heal.
Isis Unveiled, and Isis Veiled, thou art;
The Earth below our feet, the Moon on high.
In thee, these two shall never be apart-
The magic of the Earth, and of the sky.

From The Witches’ Goddess. © 1987 Janet and Stewart Farrar

A Wiccan spell for money and prosperity that is enhanced by the glowing influence of the full moon. Use this ritual and chant to attract good luck to your life and improve your finances.