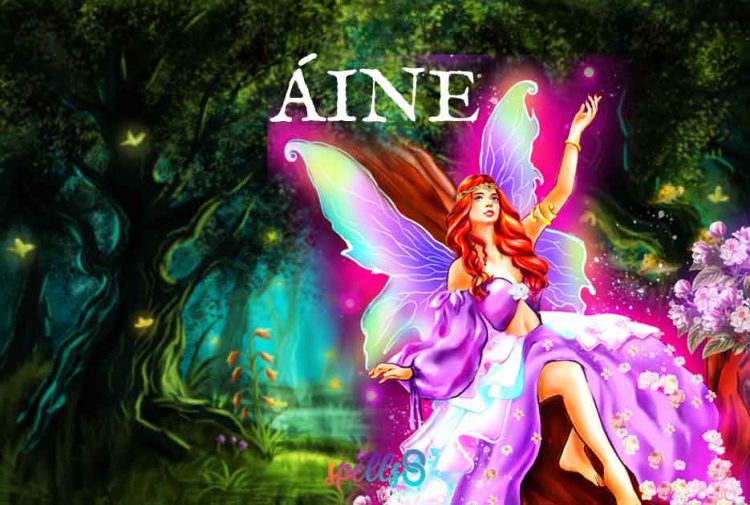 The Goddess’ Temple: Myths & Symbols of the Divine Feminine in History Áine, the Goddess of Fairies: Symbols and Mythology
Bookmark

Áine is a solar goddess in Celtic mythology, and considered the Irish Queen of the Fairies. As a deity, she is the daughter of Egobail, one of the Tuatha Dé Danann, a supernatural race of Irish beings. She is a goddess of fertility, protection, healing, Magic, luck, the earth and the moon.

Áine (pronounced AWN-yah) is an Irish name that means radiance, which is the perfect name for this beautifully bright deity. Often associated with summertime, her energy is warm, abundant, and empowering. In this article, we’ll explore the story of this goddess, her mythology, and how to worship Áine with offerings, symbols and correspondences.

Áine was known as the daughter of Egobail, an Irish God. One story of Áine describes her as taking a geas that would restrict her from sleeping with a man with gray hair. A geas is a magical promise that shouldn’t ever be broken.

Áine was in love with a man named Fionn, who still maintained his youth. However, their love story was short-lived due to certain magical interference. Fionn’s sister, Miluchrach, was jealous of Áine’s interest in Fionn and lured him into her mystical lake, where she bewitched him. As Fionn emerged from the water, his hair was as silver as the midnight moon. Áine stayed true to her vow and relinquished all ties to Fionn because of his sister’s trickery.

Irish mythology also tells the story of Áine and the King of Munster, Ailill Aulom. One day, King Ailill sought out help for his kingdom’s vegetation. The land was not producing the grass and growth needed to sustain his livestock. Because of this, his people’s food supply was threatened. The King embarked on his mission to obtain the power of Knockainey, which was said to grant those who visited restorative abilities, which he intended to use on his land.

There, the King encountered the most beautiful woman he had ever seen, Áine. She was as radiant as the sun, hypnotizing, mesmerizing, and the King had never seen a woman as magnificent as her.

Without thinking, he forced himself upon her. Áine retaliated by biting off his ear. The symbolism of the missing ear signifies the King’s fall from his throne. In Celtic tradition, a king must be perfectly intact in order to rule over the land. Áine understood what would happen to Ailill, and soon he was stripped of his rulership. The King’s fall from grace was one example of Áine’s ability to provide authority and power and remove it just as swiftly.

It’s also a warning about what the land will eventually do to us all if we continue on the path of resource rape, and environmental poisoning that our current society follows. Áine will protect herself.

Áine was one of the goddesses who eventually suffered at the hands of Christian monks who sought to do away with all of Ireland’s pagan beliefs. Although her legend did survive, she was transmogrified into a fairy queen.

Many stories sprung up around the belief that Áine often turned herself into a fairy in order to mate with mortal men. This was oftentimes done by enchantment rather than by mutual consent. Spellbound by the goddess, these men were said to do whatever she commanded. Ultimately, the attraction was always fatal for her lovers. It was, therefore, easy to see why Catholic monks might have viewed her as a enemy of the church.

Áine is said to have given birth to a fairy race of beings, which is where she received the title Goddess of Fairies or Queen of Fairies. She is known as the forest’s protector and their fairy realm.

Sun: Áine is a sun goddess, often celebrated along with the Summer Solstice. She is strongly identified with this event, on which night torchlight processions are still held in honor of her. Bonfires and torches were traditionally lit on that night, and it was believed that the faery folk carried lights, led by goddess Áine.

Horses: The horse is a solar animal, pulling the chariots of several gods in European lore, such as Apollo and being sacred to The Morrígan. It embodies freedom and strength.

White swan: The Goddess’ sacred animal is the swan as it was said that Áine could shapeshift into this bird and sometimes wore a cloak made from swan feathers. Swans were sacred to bards, and their feathers and skin were used to create ceremonial cloaks called tugen.

Moon: Some sources say she is a Moon Goddess. It’s likely that she was connected to both the sun and the moon, or that her identity may have later become merged with the Goddess Anu.

Titles and Epithets of Áine

The Goddess Áine has many names: Goddess of Love, Goddess of Summer, and Queen of Fairies. Her name can be translated as ‘Brightness’, ‘Delight’, or ‘Radiance’.

She is also called Grian, which means “Sun”, as well as “Queen of the Fairies of South Munster.”

How to Worship Áine

Calling out to the Goddess during the Midsummer can be very powerful as you express your love and gratitude for her. During this period, her energy will be at its peak, and you’ll be able to establish a strong connection with her easily.

Spending time outside under the sun is another way to worship this Goddess. Ask the sky for her blessings, and as the sun’s rays grace your skin, feel her energy penetrating your being, answering your call and fulfilling your wishes.

Working with the moon is another way to worship Áine, who is associated with the Divine Feminine. The moon and its phases are in constant waning and waxing, much like Áine’s ability to promote sovereignty or destroy it. On a full moon, sending your praise to Áine will be beneficial for you to receive her blessings.

Áine can be evoked through any of her symbols when used as sigils, or by lighting a gold candle. You can dedicate a permanent or temporary altar for Áine whenever you wish to bring her into your life.

When working with a Goddess or deity, it’s important to offer something in return for their blessings. These offerings should have an association with the Goddess in order to cultivate meaning and value. Providing an offering for Áine shows your love and dedication to her.

Find more topics about working with the Fae in our Coven.

“Áine, goddess of love, fairy queen, as day passes into night and night passes into day, hear my prayer. Give me the courage to stay true to my heart. To birth that which I am called to do. Help me to know my gift, and share it with the world. In this I pray, thank you, Áine!”

Back to Course
Next Lesson