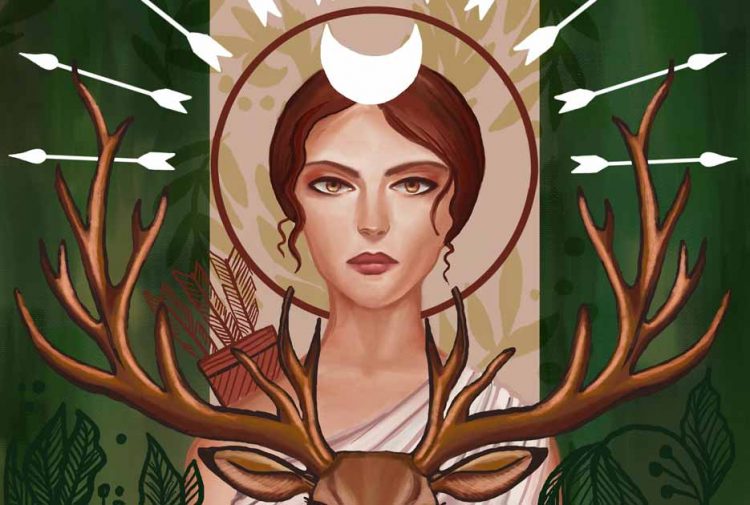 Every single religion and mythology has deities, gods and goddesses, that refer to the natural world. They could be forest deities, animal goddesses, or related to a natural element or force.

This includes many religions which, despite developing in different parts of the world with no overlapping culture, have depicted a form of ‘Mother Earth’ as a natural and animal goddess in their mythology.

In this article, we’ve put together a list of some of the various Goddesses of nature and animals around the world, taking into consideration a variety of cultures all over the planet.

Artemis is one of the most revered Greek goddesses. She was also called Artemis of the Wildland, and Mistress of Animals. Artemis is a goddess of the Hellenic era, a goddess of nature and animals, the wilderness, and hunting.

She is also considered to represent childbirth, chastity, and the patroness of young girls and women. Artemis is also a fertility goddess, with many temples dedicated to her.

She is daughter to Zeus and Leto, and the twin sister of Apollo. The goddess is often depicted in art and sculptures as holding a bow and arrow–which she was given by her father, Zeus. He also gave her eternal virginity, and hunting dogs.

Brides-to-be would give offerings to Artemis to show good fortune on their marriage and journey to becoming an adult.

Stretching across the globe to the Inca peoples of South America, Pachamama is a watchful goddess for harvesting and planting. She is also known as Mother Earth in Quechua, the language of the Inca empire. ‘Pacha’ means land or world, and ‘mama’ means mother.

The Inca people would sacrifice animals such as llamas to ensure they had plentiful and bountiful harvest seasons, and to prevent her wrath as earthquakes or natural disasters. It is also traditional to toast to Pachamama’s honor at meetings and festivals. The Inca do this by spilling some of the drink of the floor before taking a sip. This is called the challa.

See also: How Does a Goddess Choose You? Signs a Deity is Calling

Diana is an Ancient Roman nature and animal goddess. She is associated with wild animals, woodlands, the moon, and the hunt. She is the Roman version of Greek goddess Artemis and is also considered to have eternal virginity.

She and two other goddesses, Vesta and Minerva, all vowed they would never marry. Because of this, Diana is the patroness of women, virgins, and chastity.

Jupiter (the god of sky and thunder) is her father, and Latona (goddess of motherhood and kindness) is her mother.

When Catholics came and the two religions were forcibly blended, many believed Pachamama was the representation of the Virgin Mary.

In Ancient Greek, Gaia was referred to as Mother Nature, Earth Mother, Mother Titan, or Great Titan. She is considered to be one of the most natural goddesses there is, a visible representation of the Earth. The goddess was one of the first beings thought to exist, right from the beginning of time itself. She birthed mountains and planets.

In Ancient Greek art, she is often seen as the goddess of fertility, and portrayed as a large-breasted, fertile woman. She is usually drawn wearing green clothes, and is associated with nature, the seasons, agriculture, and fruit.

Ceres is an Ancient Roman goddess of grain crops, fertility, motherhood, and agriculture. The mythology behind Ceres is like that of the Greek goddess Demeter.

A seven-day festival was held in April called Cerealia. It was a major festival held during the Ancient Roman era. Torches were lit and affixed to foxes tails allegedly to cleanse the growing crops and prevent disease. Other games were played throughout the festival until pagan festivals were banned.

She is part of the Aventine Triad of plebeians and considered the chief deity of the peasantry and common folk. Ceres is honored traditionally at both weddings and funerals, too.

Terra is also known as Mother Earth and was considered the personification of Earth in Ancient Rome. She is the Roman equivalent to Gaia. A Temple of Tellus (Terra) was constructed in Carinae, Ancient Rome.

There were festivals held in her name, often associated with Ceres too, who Terra is often depicted with. They were both honored in January as ‘mothers of produce’, with another feast being held during Sementivae, the festival of sowing.

She is thought to represent growing power, the earth itself, and productivity of the earth.

Fjörgyn is an Old Norse god, mother of the thunder god Thor, and the personification of earth in Norse mythology. Another name for her could be Jörd, who is an Icelandic version of her. She is referred to in old Norse poetry as the mother of Thor and was worshipped by the Norse people.

Mẫu Địa Tiên is the Mother Goddess of Earth for the indigenous polytheistic religion of Vietnam called Dao Mau (also known as the Mother Goddess religion). She is the governor of the Earth Palace, one of four natural palaces they believe rule the earth. The others were the Mountains and Forests Palace, Water Palace, and Heaven Palace. She is associated with the color yellow.

Abnoba is a Gaulish goddess, worshipped in the areas of the Black Forest in Germany as part of an Ancient Celtic religion. As their culture did not have a writing system, everything we know about her has been picked up from other cultures like Greco-Roman depictions.

She is considered to be a forest or river goddess, and depictions also identify her with the Roman goddess Diana of the hunt.

Her name came from the mountain that the river Danube flows from. Pliny the Elder and Ptolemy wrote of Abnoba, although there are conflicting reports about where she originates.

Kishar was a Mesopotamian god worshipped during the days of Babylon. She was the female principle and represented the earth. Her name means ‘Whole Earth’. As she was worshipped so long ago, it is difficult to find accurate depictions and representations of her. She was said to be the wife of Anshar, god of the sky, and was his counterpart.

Eostre has forged a strong reputation as the goddess of spring. She is celebrated during the Spring Equinox and is also widely referred to as the Germanic goddess of dawn. If we trace the name Eostre back to the Proto-Indo-European roots, we’ll discover that it means “morning” or “dawn.”

Spring is also the time of the year when many cultures are in celebration and festival mode even as a new planting season begins and people can connect with the earth once again, mainly the Wiccan holiday of the Spring Equinox, Ostara.