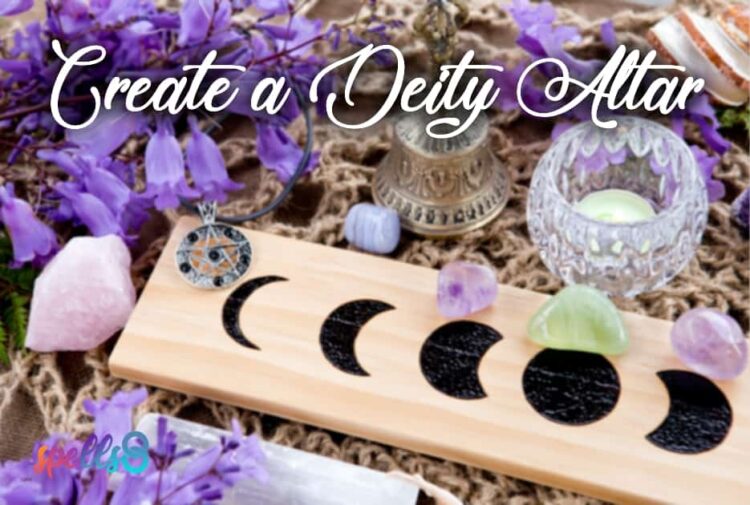 In modern paganism and polytheism, you will often hear others, witches and non-witches alike, talking about their deity altars. These are a common occurrence in neo-Paganism and you may be wondering what they are, why you might or might not need one, how to set one up, and what to do. If this is of interest to you, keep on reading to learn more!

What is a deity altar?

To understand what a deity altar is, you first must understand what an altar is. To put it simply, an altar within witchcraft and paganism is a place of worship and work. This is where many witches setup their tools, statues, and candles — either permanently or temporarily — for rituals, display, worship, or spells.

A deity altar is an altar made specifically for one or more deities. It can be on any surface that you or your deity (or deities) deem necessary or worthy. It can be as simple as a table with a small bowl for offerings or as elaborate as a full tabletop complete with statues, decorations, and more.

People across the globe have setup places of worship and honor to Gods for hundreds, if not thousands, of years. These may have been elaborate or simple, and some places had community altars for an entire neighborhood, community, or town. Before moving on, we can discuss some of these altars and places of worship throughout history.

It is important to note that in most sources, places of worship for a deity are called shrines while places of sacrifice and offerings are called altars. Again, these two words — altar and shrine — get used synonymously in neo-Paganism for those that work with deities.

Perhaps one of the most well-known pantheons of deities, the Greek Gods had shrines, temples, and what we would call altars throughout their areas of worship. They ofter served a different purpose than what we would think of today, but they are still altars and shrines nonetheless.

Greek altars for deities were usually made of stone, especially those in shrines that got regular use. However, there are some altars that are said to have been built up over time. One of these, for example, is the altar to Zeus in Olympia. It is said that this altar was over 20 feet high and made of the ashes of burnt offerings to Zeus. Over the years, these burnt offerings and ashes piled up to create a large altar and offering space(1). However, this altar was never actually found by archeologiests, only hypothesized based on writings at the time. Still, that doesn’t make it any less amazing of an altar.

At Greek altars and shrines, offerings were commonly left. In the temple, the Priests would handle the worship and larger offerings to the Gods. Some communities had smaller altars to the Gods where community members could go and give their offerings and say their prayers. Even households would have their own altars or shrines to the Gods that were important to them.

Another pantheon of deities that had shrines and altars to their Gods in ancient times are the Egpytian deities. Just like the Ancient Greeks, the Ancient Egyptians had many different types of altars and shrines for their deities. However, the culture surrounding the deities and worship was slightly different. In Egyptian temples, two different types of altars were generally used. One was a small protable stand with a top that could be changed out. A plate, bowl, and other types of dishes could be put on top depending on the type of offering.

In temples, there were also stone altars. These are much like the smaller altars in their use but they were much larger and without the changing tops. Not many of these altars have been found(2) but they are mostly known from the sun temples. In these temples, the altar would have a small slope or stairs on the west side so the priest could climb up to the altar and make an offering while facing the east.

As some of the less well-known deities (or often lumped in as all Celtic), Irish shrines and altars are much different than the Greek and Egyptian pantheons we have talked about so far. Though altars may have existed for Irish deities, it was far less common to see an altar or shrine to an Irish deity in the same manner we would see for the Greek deities.

Rather than an altar, many Irish deities are embodiments of place and therefore have sacred places, towns, and natural elements rather than full temples constructed to one deity. For example, Brigid has many sacred wells in Ireland but no ancient temple associated with her worship. That isn’t to say that shrines to the goddess didn’t exist, as is the thought behind the church at Kildare(3), it was just much less common than the gods of other pantheons, at least to our knowledge today.

Much of this has to do with deities in Ireland being very regional — many stories of the deities would change from one county to the next. Temples and holy buildings were also not common before the Greco-Roman era. Instead, ceremonies generally took place in forest sanctuaries(4).

However, the Irish deities have been included in this post as an example that an altar or shrine to the Gods is a place of sacredness, no matter if it’s in a temple, your home, or the natural landscape.

What’s the purpose of a deity altar?

In modern paganism, a deity altar serves the purpose of setting aside sacred space for your deities. It serves the same purpose today as it did thousands of years ago! Having a dedicated space to give offerings to your deities and to pray gives you structure in your worship and your deities a place in your home.

Just like antiquity, approaching an altar in your own home is a sacred moment between you and the divine. Offerings of incense smoke, food, and libations can be easily and routinely given if you have the space set aside for it already.

Should you have a deity altar?

Choosing to setup an altar to one or more deities is a personal decision and not one that everyone agrees on. Many people choose not to have a deity altar and instead make their entire home sacred, create sacred space as needed, or speak to their deities on an as-needed basis.

There are many things to consider before setting up a deity altar. These include space, time, and your personal relationship with the deity in question.

The first thing to consider is how much space you have. A deity altar does not need to be elaborate. However, it should generally be large enough for your use. If you only plan on praying at your deity altar then a small surface with an idol — an image, statue, or representation of the deity — should be plenty of space.

If you plan on giving offerings to your deity at the altar then you may want more space. Keep in mind that different types of offerings are going to require a different amount of space. For example, incense takes up far less space than a plate of food.

What is your routine like? Do you have enough time to dedicate to your deity altar? Many people believe that the deity altar should always be clean and given a few moments of attention on a regular basis, if not every day.

Consider the time you will spend at the altar. If you only plan to spend a few moments, then an altar where you can stand is most likely best. If you plan on spending a longer amount of time at the altar, then you may consider a lower altar that you can sit or kneel at.

Another aspect of time to consider is when you will be at your altar. Do you want the sunlight to hit your altar as you pray in the morning? Then you should consider setting up the deity altar at an east-facing window. If this is not possible, then you may need to rethink your altar’s location and the time you spend at it.

As with any other relationship, your personal relationship with the deity is going to play a role in your decision to have an altar. This is not something that anyone else can tell you or direct you in.

Ask your deity what they think about an altar or shrine specifically for them. Some deities may require an altar, regular offerings and prayers, and attention during certain days of the year. Other deities may not require any of that!

If you feel that a deity altar would help you connect with the Divine in a meaningful way then you may want to consider setting up a deity altar.

You have decided to create the altar…now what? Well, there are a few ways you can setup the altar and each one is going to work for different people. When you setup your deity altar, be sure to keep these things in mind. Also, what works for others may not work for you. Make your choices based on how they feel to you!

One of the first things to do when setting up a deity altar is to choose the location. You can do this based on the associations of the deity, the space you have available, or what is comfortable to you.

You may want to setup an altar outside in your garden if you work with a deity such as Demeter, Kore, or Lugh. These deities have associations with the outdoors, harvests, and the changing seasons.

If you work with a deity such as Brigid or Hestia, then you may want to create your altar in the kitchen or living areas. These deities are associated with the hearth and home.

Besides the associations of the deities, it is important to choose a space that you will look at often. A deity altar is a place of importance in your home, the space where you invite the deity into your home. It would be rude and offensive to put them in a dark corner that never gets any attention — unless, of course, they prefer that. Again, this is where knowing the personal relationship between you and that deity is important!

Next, choose the surface for your altar. Some choose an endtable. Others may choose a coffee table. Still, many people choose an important shelf. Your surface will determine the amount of items you can place on your altar, the type of offerings you can give, and the way you approach the altar. This choice is yours, so choose a surface that works well for what you need.

The most common elements on a deity altar include at least a representation of the deity and an offering bowl. However, every deity and every person is different. Choose the contents of your deity altar with the deity in mind. Here are a few options to get you started.

Lastly, and not everyone is going to do this, you may want to consider setting up a schedule for your deity altar, at least until you get into a good routine of regular attention or worship. Again, this is going to depend on you and the deity.

You’ve got the altar…now what?

Now comes the fun part! Light your candles, give your offerings, and say your prayers. Your deity altar is all set up and ready to use! If you don’t have a deity in mind yet for a deity altar, perhaps you would enjoy learning about one of the many we have here on Spells8. You can find that and more by exploring Spells8 and the Infinite Roots Coven.