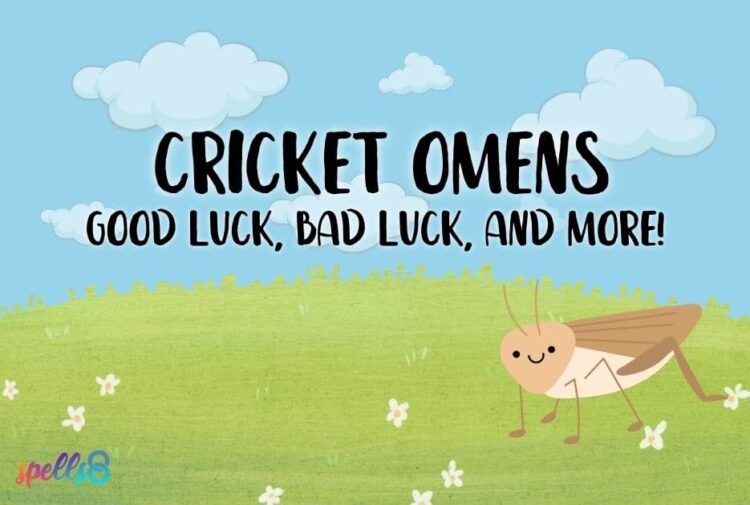 Nature, for so many of us, is an important point of contact with our spiritual selves. Whether it is taking time out in a beautiful setting to connect with our place in the universe or holding nature in the palm of our hand, nature can be a powerful tool to delve deeper into our spiritual lives.

For many people the presence of particular animals and plants has a deep spiritual meaning, and no more so than the cricket. Crickets have existed on earth for over 200 million years and have been valued by cultures around the globe for their spiritual significance and symbolism.

So, what is the spiritual significance of the cricket and their beautiful song? And what might it mean if you are often encountering crickets or even if one shows up in your house?!

Read on to find out more!

The Spiritual Meaning of the Cricket

One thing that is almost universally agreed is that the spiritual meaning of the cricket is a good one. In cultures across the world, crickets have been a sign of good luck associated with wealth, abundance, and prosperity.

Crickets are also associated with a connection to the divine as symbolized by their prominent antennae. However, as well as symbolizing this transcendent connection, crickets also demonstrate a groundedness and connection to the earth. This is where they are found, after all! This has been described as the perfect spiritual balance that so many of us strive for, to be fully present in the here and now whilst also remaining open to what lies beyond us.

Crickets come in a beautiful array of colors and with many different markings. Some believe that seeing a white cricket means that a special love is coming back into your life. A black cricket is thought to symbolize the importance of trusting in your deeper wisdom and intuition. A green cricket is thought to symbolize that a new chapter is about to begin in your life or that you are ready to set out on your own spiritual path.

See what others have to say about colors and magick from our Witchy Challenge in the coven!

Of course, given the deep spiritual meaning associated with the cricket across many cultures, killing a cricket is seen to be very bad luck!

Encountering a Cricket at Home

Many agree that all this good luck that crickets bring is amplified if you come across one in your home. Many people consider crickets to be good omens and that the presence of one in your home symbolizes that you are about to come into some good news.

Crickets have been associated with bringing genuine happiness into the home. The presence of a cricket symbolizes protection of your home and the good things in your life. A cricket showing up in the house has been associated with things going well for you in life. They come as a sign of peace and comfort into your home.

The presence of a cricket has also been associated with an important moment of revelation in life. The presence of the cricket might be symbolizing a new start in your life. Some people also consider crickets to be a divine messenger alerting you to a message from the universe. And of course, crickets quickly alert you to this message by their characteristic song!

What does it mean when a cricket lands on you?

If you think that a cricket in the home is good news, then wait until one lands on you!

A cricket landing on you has been associated with a moment of connection with the universe. The presence of the cricket symbolizes your spiritual openness and that you are in a prime position to receive insight from the universe.

Some have suggested that a cricket landing on you many be a sign of anxiety in your life. You yourself will know if this is the correct message of the cricket’s presence with you.

What does it mean to hear the Song of the Cricket?

And finally, a few of us can encounter a cricket without being entranced by its song. So, what is the spiritual meaning of the cricket’s song? And what might it mean for you when you hear it?

Crickets produce their unique song by rubbing their wings together. In China, the cricket’s song has long been seen as a thing of beauty. The cricket’s sound is considered music and crickets were even kept in cages in prominent Chinese houses so that the cricket’s song could be heard in the house. For many, including in Native American tradition, hearing the song of the cricket is a sign of good things coming your way.

Keeping crickets as pets emerged in China in early antiquity. Initially, crickets were kept for their “songs” (stridulation). In the early 12th century the Chinese people began holding cricket fights. Throughout the Imperial era the Chinese also kept pet cicadas and grasshoppers, but crickets were the favorites in the Forbidden City and with the commoners alike.

One thing you can be sure of is that a cricket showing up in your life, and perhaps even landing on you or turning up in your home, is a great sign. Good things are around the corner both spiritually and materially. The cricket is a great omen, however you encounter it.

11 Goddesses of the Forest, Wild Animals and Nature

Every single religion and mythology has deities, gods and goddesses, that refer to the natural world. They could be forest deities, animal goddesses, or related to a natural element or force.

Pagan chants are often taught at festivals or public rituals, and are rarely written down. For this reason, they tend to change and mutate as they are being passed on; there are often multiple variations of a chant which are passed around in different geographic regions or social networks.

Did you know that animals can be positive symbols for wisdom, abundance and success? Francisco explores the spiritual meanings of 10 animals he found while reading a book by Richard Webster.