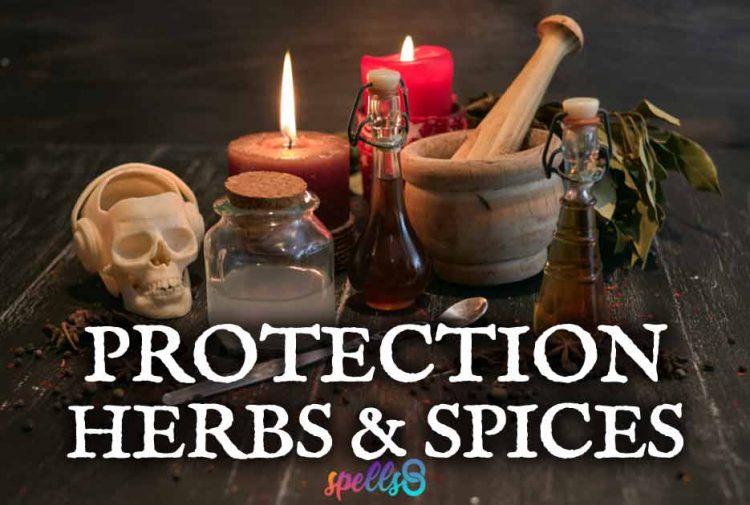 Herbs and spices have always had a special place in the Witch’s Apothecary. The use of herbs dates back thousands of years and has been an indispensable part of human evolution.

Protection herbs have been used by people from different cultures around the world in many ways, and these are a mainstay in many protection rituals and spells.

One of the things you can do with protection herbs and spices is banishing negative vibes and energy that might be lurking around. You can also use them to boost your confidence and good luck to help you go all out and achieve your dreams.

Here are some popular herbs for protection that can be used when making a spell jar for attracting good and positive vibes. Keep these Witch plants and herbs always within your reach, either in your home or close to your altar even if you don’t see an immediate need for them. You’ll never know when you will need them urgently.

Rosemary has a rich history and is considered a special herb with lots of spiritual benefits. There’s a popular belief that the herbs first grew when baby Aphrodite’s father fertilized Gaia’s ground. There’s also the belief that the herb is somehow linked to the Virgin Mary of the Catholic faith.

Rosemary is typically used as a substitute for other magical herbs, and it’s known for its protection ability and is one of the oldest incense, just like Myrrh and Frankincense. It is commonly used to prepare various protection and purification rites. Rosemary is also widely known to increase mental clarity and help maintain focus when inhaled slightly.

Rosemary Wash for a Job

Take a cleansing bath and cast this candle spell with a chant to get the job you’re waiting for. A simple Wiccan ritual can boost your career with just rosemary magick and confidence!

Aside from the fact that Rosemary is an effective herb for protection and banishing spells, it is also commonly used by many spiritual practitioners for longevity spells, empowerment spells, and even love spells.

Lavender is a potent herb that originated in France. Its name “Lavender” means to “purify” or “wash,” which is an indication of its banishing abilities. Lavender has long been used as one of the ingredients or materials for washing, scrubbing, disinfecting, or banishing, and is a key ingredient in some soaps and washes. In some parts of Spain and Portugal, church floors were often laced with Lavender to banish and chase away evil spirits.

Craft this Self Love spell jar for happiness and confidence. Making this jar is a self-love ritual on itself, and it will help you assert boundaries and an overall deeper connection with yourself.

While Lavender has lots of protection and banishing properties, the herb is also known to have been used by witches and lightworkers to prepare attraction and love spells. There is even a popular saying that having a sprig of Lavender close to your bed is a great way to attract a lover to your home. Lavender is also one of the herbs used for rituals and spells that have to do with dreams.

Basil is a popular herb in folklore all over the world. It is a magical herb that is well known by many culinary and magical communities. Basil is a Greek word for “King,” which makes sense because it has long been used for protection, power, and blessings. Basil was said to be used in creating Holy Water in Christianity, and there’s also the popular belief that it offers protection against scorpions and other dangerous insects and reptiles, as found in African folklore.

Roll this oil on your wrists (pulse points) or temples to connect with the Goddess. Anoint your candles and other tools during ritual work. Receive a blessing from the Goddess in her many incarnations, from the Triple Goddess to any other embodiment of the Divine Feminine.

Basil is one of the few herbs used in protection rituals and spells, as well as rituals for blessings, empowerment, improvements, banishment, love, and money. Basil is believed to be most potent on Sundays and Fridays, and using it once a week for three months has the potential to bring about tremendous transformation in the life of a person.

Rue is another herb with a long and rich history and can be traced to ancient Italian witches. It is believed that this herb is potent, and has the potential to banish any form of unclean and evil spirits. Witches and spiritual practitioners would often tie them together in bunches and use them as a tool for cleansing and exorcism. It is also widely believed that Rue was used in creating Holy Water in Christian churches.

An aura cleansing bath can clear paths and get us rid of bad vibes that keep us from moving on. This herbal bath spell used to renew the spirit and start attracting positive things, such as good luck, prosperity and even money through the power of positive, fresh energies.

Rue is one of the most powerful repelling, exorcising, and banishing herbs in history and is a mainstay in the collection of most witches. Aside from being commonly used for protection and banishing, Rue is also one of the main ingredients in rituals and spells that have to do with magical healing, empowerment, protection, and justice.

Garden Sage is different from the sacred Sage of Northern Baja California, so it is important not to get them confused. Common Garden Sage is accessible and possesses lots of protection and cleansing properties. Sage is often linked to wisdom, good luck, and long life, and is commonly used in many ceremonies for cleansing. It is also widely believed that Sage is used in strengthening people who are emotionally down or experiencing one form of grief or the other.

Kundalini is a form of divine feminine energy (or Shakti) believed to be located at the base of the spine in Hinduism. Burn this incense with sage to promote the activation of Kundalini energy.

One thing people love about garden sage is that it is easily accessible, as anyone can grow it in their garden or pick it up at the nearest grocery store. If you are looking to banish negative vibes, negative energy, or evil spirits, you can burn garden sage in a bundle or throw them into a burning flame. The fragrance produced while burning it can help protect and cleanse your space.

Rose needs no introduction; it is one of the most popular herbs and is used for a variety of purposes. Rose is widely regarded as a healing and heart-opening herb but is also a potent herb for creating boundaries and protection spells. It is believed that Rose has high vibrational energy, which can be used to help put you on the right track if you are experiencing low vibes.

Salt is commonly used in cleansing and purifying magick. It is also fantastic in baths as it helps to ease pains, reduce inflammation and soften skin. Make these beautiful bath salts filled with love and peace to enjoy in self-love baths or for thoughtful gifts for others.

Rose petals contain antioxidants and polyphenols and are generally used to prevent the body from experiencing inflammation and cell damage. Rose petals are also used as one of the main ingredients in water for protective baths. Rose powder is also sometimes added to filtered water, which is then sipped regularly for purification.