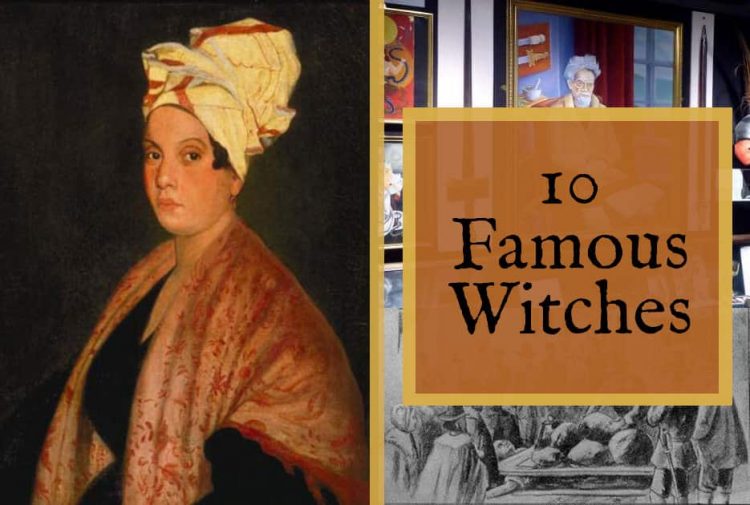 Throughout history, the idea of witchcraft has stirred cultures from all over the world. Many people have been accused of witchcraft, Voodoo, and other magickal practices. Some of these historical witches were severely punished for their perceived powers, and others were well-respected and appreciated for their service. It’s no secret that being accused of witchcraft in the past may have cost you your life. Today, witchcraft is more widely accepted and practiced by people from all walks of life. In honor of this magickal freedom that we have today, here are some of the most important figures in the history of witchcraft.

Marie Laveau, the Voodoo Queen, is one of the most well-known and celebrated figures in witchcraft history. Born into a poor family in 1801 in New Orleans, Louisiana, Marie had to work hard from an early age to support her family. Despite her difficult circumstances, Marie was determined to make something of herself. She gained a reputation as a powerful medium and healer throughout her lifetime. Marie’s ability to connect with the spirits of the dead helped her build an enormous following among the city’s impoverished residents. In 1849, Marie opened her own Voodoo temple, the first in the United States, and quickly became one of New Orleans’ most powerful women. Throughout her life, Marie became known for her generosity and her passion for helping others.

John Walsh, a man who lived in Netherberry in what is now Dorset, England, was accused of witchcraft and arrested in 1566. He was brought for questioning and claimed to be in contact with fairies who would tell him when someone was bewitched. He also claimed to have a familiar that appeared to him as either a cat, a dog, or a man with cloven feet. John Walsh claimed to only use his powers for good saying, saying that anyone who chooses to do bad with their powers can never heal again. [1] It is unclear what happened to John Walsh, but it is possible that he was acquitted and let go.

Mother Shipton, born as Ursula Southeil, was a prophetess who lived in North Yorkshire, England. She is best known for her prophecies about the end of the world which she claimed to have received from God. Her prophecies were often used by religious leaders to motivate people during times of crisis or to provide guidance in the event of disaster. In her later-life, she retreated to the woods after the death of her husband. For the remainder of her years she was claimed to be a powerful witch. People traveled long journeys to receive her magick. Mother Shipton remains an enigmatic figure in history and her story continues to be studied by scholars today.

Morgan Le Fay is one of the most popular and well-known characters in Arthurian legend. She is also one of the most mysterious. Morgan was born to King Arthur’s sister, Morgause, and her husband, King Lot. Morgan had a twin brother, Mordred, who was conceived out of wedlock. Morgause took her away from Camelot to serve as her adviser and counselor when she was just a baby. Over time, Morgan became known as the Lady of the Lake (after being banished there by her uncle, King Uther Pendragon). Morgan is said to be able to transform into a fish or a dragonfly. She also has a magickal sword called Excalibur that can only be wielded by someone with a pure heart.

Laurie Cabot is the official Witch of Salem, Massachusetts. Cabot has been practicing witchcraft for over 30 years and has dedicated her life to educating others about this ancient art. She offers public tours of the Witch House where she lives and conducts her rituals and private consultations. Laurie Cabot is a leading authority on witches and witchcraft in The United States and around the world. Her work has been featured on television shows such as Oprah and The Travel Channel. She is also an author of many books on witchcraft.

The Salem Witch Trials were a series of trials that occurred in the town of Salem, Massachusetts. In the early 17th century, there was a series of trials that came to be known as the Salem Witch Trials. These trials took place between 1692 and 1693 and involved accusations against more than 200 people, none of whom were actual witches. At the heart of these trials was Abigail Hobbs, a young woman who was accused of witchcraft and sentenced to death. The story of Abigail Hobbs is one that is full of mystery and intrigue, and it has fascinated historians for centuries.

Often credited with being the Father of modern witchcraft, Gerald Gardner created what is now known as Wicca. Gardner was born in England but spent much of his life abroad studying the cultures of others as he was an amateur anthropologist. It is reported that he was initiated into The New Forest Coven, though his claims have been scrutinized by historians for quite some time. He published a book titled High Magic’s Aid in 1949 before the witchcraft laws were repealed. This book is a magickal text disguised as a work of fiction. He later published Witchcraft Today after the witchcraft laws were repealed. Gardner passed into the Summerland in 1964 after suffering a heart attack.

Agnes Waterhouse is a famous figure in English witchcraft history. She was accused of witchcraft and put on trial for several crimes, including the death of her husband. During her trial, she confessed to being a witch and having a familiar, a cat, named Satan (also spelled Sathan), that originally belonged to another accused witch by the name of Elizabeth Francis. The cat was given to Agnes by Elizabeth in exchange for a cake, and Elizabeth reportedly taught Agnes the art of witchcraft as she was instructed. Agnes Waterhouse was hanged in 1566 after being found guilty of her crimes, becoming the first woman in England to be executed for witchcraft.

Aradia, also known as The Witch of the Woods, is one of the most well-known figures in European witchcraft. Her story, although heavily disputed, has been documented and retold for centuries, and she remains a popular figure in modern witch folklore. Aradia was born to a peasant family near Pistoia, Italy. When she was just 12 years old, she claimed to have had a vision in which she was visited by an angel who instructed her on how to use her powers for good. Over the next several years, Aradia continued to receive similar messages from her guardian angel. She was guided by Diana, who legend believed to be her mother or a witch herself. Aradia began preaching their gospel of witchcraft to other common-people in the area so they could free themselves from the Catholic Church.

Another accused witch from The Salem Witch Trials, Giles Corey was born in England in 1611. By the time of his trial, Giles Corey was already 80 years old. His wife, Martha, was arrested for witchcraft first and, for unknown reasons, Giles decided to testify against her. He later tried to recant his testimony which only furthered suspicion against him. The accusations against Giles Corey were brought about by Abigail Hobbs during her own confession as well as Exekiell Chevers and John Putnam, Jr. on behalf of many others. Giles Corey was executed in 1692, though he was not hanged. Giles Corey was stoned to death for refusing to go to trial. He is famous for his last words as stones were added to the plank on top of him — “more weight“.

Were they all witches?

Some of these people were victims of their time and may not have held any power or practiced witchcraft. Others may have been some of the most powerful witches to date. The idea of the witch has existed since ancient times, has been acknowledged in all religions, and is characterized in books and entertainment. Luckily, today we’re able to embrace our magickal ways of living and live our witchy truth. To all the witches that were executed, isolated from their communities, and thought to be an embodiment of evil, may your souls fly to the highest realms, and your magick live on forever.

15 Signs that you are a Witch

If you have ever asked yourself this question, it means that some event in your life made you perceive the magick that lives within you. And how do you know if you are really a witch? Knowing some key aspects of your sensitivity and personality will help you dispel doubts.

If you have ever asked yourself this question, it To be a Witch is to be an eternal seeker, a student of nature and of the spirit world. Witches are constantly expanding their knowledge and their vocabulary, and new words associated with witches appear all the time. Do you know what all these witchy terms mean?

Nature Spirituality is any spiritual belief that involves working with the divine as immanent in nature. Many nature religions are polytheistic, animistic, and/or pantheistic. In this post, we will explore the origins of modern-day nature spirituality, also known as Nature-based Spirituality.